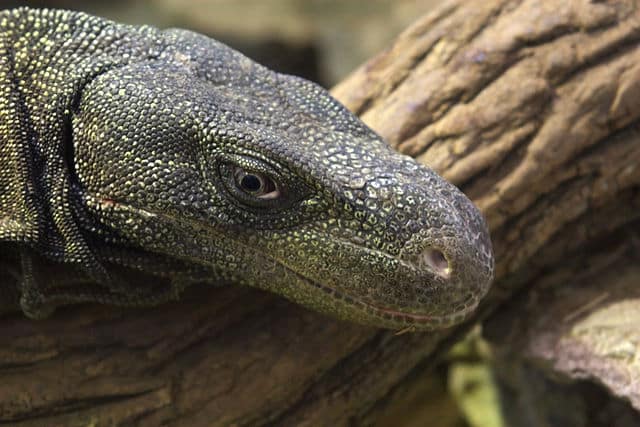 Crocodile monitors are listed in Appendix II of CITES. No population estimates are available. Given their large range on the world’s second largest and relatively undeveloped island, they are probably in no imminent danger at this time. However, conservation efforts on behalf of a species can never start too early. These endeavors need to address the concerns of private hobbyists, institutions and the island itself in a productive manner.

The crocodile monitor is said to be the longest monitor lizard with confirmed individuals in private collections reaching lengths of more than 12 feet. The typical crocodile monitor kept by a hobbyist may reach a length of 8 feet. The body is short by comparison with a tail usually at least two-thirds the length of the animal. Growth rates of 2 inches per month have been observed in captivity for the first few years after hatching.

Few people have had the opportunity to raise crocodile monitors from hatchlings, as opposed to juvenile or adult wild-caught specimens, thus most research shows maximum longevity in captive specimens at around 10 years. However, their life span should be comparable to other large captive monitors, which is 15 years or more.

Crocodile monitor gums are subject to bleeding, although it is unclear whether this is a natural result of cutting new teeth, a consequence of biting prey or a fear response. A crocodile monitor’s teeth may also become imbedded in the gums, resulting in infection and the need for treatment.

Crocodile monitors enjoy basking which may be the reason for cataract problems noted in some individuals, even resulting in blindness.

Wild-caught crocodile monitors have been found to harbor flagellates, mite ova, oxyurids, cestodes, and strongyles, among other parasites. With proper husbandry, however, especially access to natural sunlight and good diet, these lizards are typically not adversely affected.

Crocodile monitor enclosures are typically taller than wide, and long enough to allow free movement of the lizard.

Crocodile monitors should generally not be kept together, especially those of the same sex. If one plans to keep a pair of them, the best strategy is to first set up a “howdy cage” to allow the monitors to see one another and interact within the safety of two separate cages before they are introduced. They must then be monitored closely for at least a couple of weeks for any signs of hostility when placed together.

On the other side of the coin, it has been noted that crocodile monitors may ultimately pair bond in captivity, at least in some cases.

Crocodile monitors have been kept successfully indoors and outdoors under either natural sunlight, or UV and basking lights. They seem to do best with a basking area of 110 to 120 degrees Fahrenheit with an ambient cage temperature in the low 90s Fahrenheit during the day. Include cooler places within the cage for thermoregulation purposes. Low 70s at night are preferred, which closely approximates the typical equatorial climate of New Guinea.

Some keepers have noted, although not advisable on a regular basis, that crocodile monitors can tolerate temperatures as low as 45 degrees at night given the opportunity to warm up fully during the daytime. Regardless of high humidity, ragged sheds, as with other monitors, are the norm for this species.

Many different substrates, such as peat moss, mulch, gravel, natural earth, and different types of wood shavings or bark, have been used with crocodile monitors. In general, the substrate should be able to retain moisture without creating an environment for pathogenic bacteria or mold, as well as creating a soft drop-zone for lizards that are inclined to jump from high areas in the cage.

In nature, crocodile monitors are thought to feed mostly on birds and mammals, and occasionally fish. Rodents provide the bulk of the diet for crocodile monitors in a captive setting, including mice, rats and rabbits. Domestic birds, such as chickens and quail, are also regularly taken, as well as shelled, hard-boiled eggs and specialized zoo carnivore diets. A few institutions/individuals also feed them fish and, rarely, other seafood such as shrimp. Feeding follows the same guidelines as other monitors, e.g. twice a week in adults and more often in young. Depending on environment, feeding may be increased, such as smaller feedings daily, or decreased as appropriate.

In captivity, crocodile monitors should be fed using long forceps, snake tongs, or the like, to avoid injury to the keeper. Whenever possible food should be offered on a bare surface where there is no chance that substrate can be ingested.

Crocodile monitors prefer a relative humidity of 70 percent or more. They have been kept at lower humidity, which usually requires two or three hand mistings a day or the installation of a timed misting system.

In dryer areas of the United States, crocodile monitors are often provided with a pond and may soak for hours at a time. Some even sleep underwater, although they don’t show much in the way of aquatic adaptations. These aquatic tendencies are probably behaviors related to the flooding that frequently occurs in their natural habitat of rivers and streams. Many individual crocodile monitors never soak, nor even drink, from ponds that are provided, however, preferring to get all their moisture from drizzle/wet spots.

Because New Guinea is just south of the equator, the photoperiod differs relatively little throughout the year. In addition, although the island experiences a monsoon season, rainfall is also fairly consistent throughout the year in the lower areas where this species is known to occur.

This species can be extremely dangerous to keepers and must be handled with utmost respect. Finger amputations have resulted from bites, as well as deep wounds severing tissue, which required hospitalization. Temperament-wise, wild-caught crocodile monitors are usually much more nervous than captive-bred crocodile monitors, although incidents have been noted for both types. The personality of individuals runs the gamut from aggressive lizards that will attack on sight, perhaps as a feeding response, to others that have been described as “dog tame.” Documented cases exist of specimens that have been trained to go from one place to another through the use of commands, and even to “fetch.”

The typical crocodile monitor is not aggressive unless cornered or roughly handled, although keepers must be wary when working with this monitor at all times. The species is generally considered by those who have worked with it to be much more alert and intelligent than other lizards.

Sexing crocodile monitors is relatively easy for experienced keepers of older animals, but more difficult with younger lizards and single individuals not in a mixed group. Overall, the head of the male crocodile monitor is larger, taller and broader than the female’s.

Although male crocodile monitors have faint hemipenal bulges, the females also have scent glands in the same area, a potential source of confusion. Hemipenal bulges are not apparent in obese animals. Checking blood testosterone levels has proven mostly successful. Male crocodile monitors’ testosterone levels are typically 10 times that of females.

The suggestion has been made that regional variation in color and other signals may be important in mate recognition. In addition, most successful breedings have occurred with individuals kept outdoors in natural sunlight. Although copulation and egg laying have been documented from every month of the year in captivity, most of the known successful copulations resulting in viable eggs occurred from March to October. The interval between copulation and egg laying is about four to six weeks, and as many as three clutches during a single year have been recorded.

Female crocodile monitors have used different types of nest sites for oviposition. Eggs have been buried in planter boxes above the cage floor as well as under limbs on the ground. Artificial plywood and plastic garbage can nest boxes have both been used, as well as a nest box with a hole as the entry point. The typical nest box substrate is a mixture of peat moss, sphagnum moss, dirt and sand.

Female crocodile monitors may guard their eggs for several days. Injuries have occurred when crocodile monitors were not separated, and these lizards have also been observed eating the eggs of their own species. The incubation period for eggs is approximately six to eight months. Eggs have been successfully hatched in different types of incubation media, including peat moss, sphagnum moss, vermiculite and perlite, in various combinations or alone. No uniform water-to-substrate ratio has been developed. The incubation container needs some air circulation and occasional hydration. Water condensing on the lid to the point of dripping, as opposed to slight condensation, would be considered excessively moist.

Crocodile monitor hatch rates of 100 percent have been achieved by some institutions. The eggs will typically gain weight for the first five months, almost doubling their weight, and then lose weight until hatching. Incubation temperatures have been reported around 84 degrees. Time from the first hatching to the last hatching of a given clutch has been reported from about two weeks to a month. Hatchlings are usually 14 to 16 inches in length.

Hatchling crocodile monitors will usually take crickets and pinky mice for their first meal, although they may not eat for up to two weeks after hatching. Constant access to drinking water is vital. Care in feeding is also important due to the aggressive feeding response. A substrate should be used which cannot be ingested, such as a reed mat.