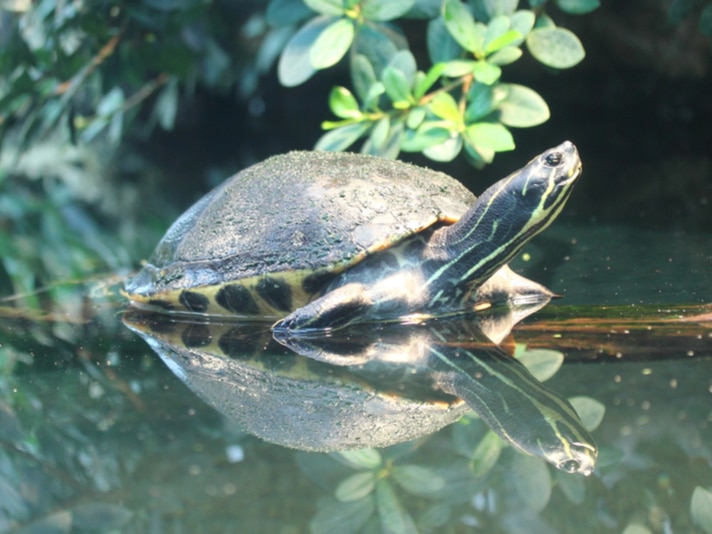 Captive care for cooter turtles of ponds and rivers.

River cooters and pond cooters are large, aquatic, hard-shelled turtles, primarily found in the southeastern United States. However, there are some species also found in the southwest. Cooters — all turtles in the Pseudemys genus — also include the red-bellied turtles, which are similar in their habitats, behavior and food preferences.

Telling the cooters apart is often a tricky task for even experienced biologists. Often, knowing a specimen’s geographic origin is the best way to determine species. In the wild, where several cooter species come into contact with each other, they hybridize. Thus, many specimens that I have seen over the years are hybrids. In general, we can categorize the cooters as belonging to river, pond or red-bellied groups.

River cooters (Pseudemys concinna) are large turtles, reaching 13 inches and sometimes more in carapace length, with relatively flat shells that flare at the rear and are streamlined for riverine and other moving-water habitats. River cooters have a brown to black carapace, with reddish tinges, and the plastron is yellow, orange or reddish, with prominent patterns of orange and black. Sometimes the plastron’s margins are pinkish. The head stripes are yellow, but may even seem orange.

River cooters, in general, are denizens of large rivers, where they prefer clear-flowing water with gravel and cobble bottoms, and beds of rooted aquatic plants, such as Elodea and eelgrass. River cooters are often abundant where rock ledges extend across river channels where the Piedmont physiographic region meets the Coastal Plain. When traveling some of the major interstate highways in the Southeast, one can see large numbers of river cooters basking on the rocks in the river below. Suwannee cooters are unique in that they are known to enter brackish waters; individuals have been found with barnacles on their shells, suggesting a sustained period of saltwater visitation.

Pond cooters (Pseudemys floridana) are large like river cooters (up to 13 inches), but have relatively higher-domed carapaces in front that taper off toward the rear. The carapace is generally brown to black with vague yellow markings, and the plastron is plain yellow with no dark or reddish markings. The head stripes range from being prominent and yellow to faint and greenish. The higher-domed shell of pond cooters may help prevent the adults from being crushed by large alligators, which they are more likely than river cooters to encounter.

Specimens classified as pond cooters are often found in slower-moving water than river cooters, and they are seen basking in cypress swamps and other floodplain habitats along the Coastal Plain sections of large southeastern rivers. Pond cooters often frequent seasonal wetlands and are more likely than river cooters to move overland. This is at least true for specimens found on the Savannah River Site in South Carolina. Cooters that fit the description of river cooters bask on the rocks in the Savannah River near Augusta, Ga., whereas specimens that fit the description of pond cooters are seen in the cypress swamps downstream and are often caught in seasonal wetlands.

The third group of cooters includes the red-bellied turtles (up to 121⁄2 inches in length), with three distinctive species recognized. All are characterized by broad, red stripes on the carapace and variable black and red patterning on the plastron. Red-bellied cooters can be distinguished from river and pond cooters by the serrated pattern on their jaws. A deep notch in the front of the upper jaw is flanked on both sides by conspicuous cusps. The head is streaked with thin yellow lines, one of which is centered between the eyes, ending near the nose to form an “arrow.”

Captive cooter care is similar among the three groups; however, the red-bellied cooters may be the most omnivorous, the river cooters primarily herbivorous and the pond cooters intermediate between the other two.

Cooters do well in aquariums and backyard ponds when the water is kept clean and filtered. However, keep in mind that cooters grow to large sizes. Adult river cooters can be big, with some females reaching 16 inches and weighing 8 to 11 pounds. They are generally larger than can be kept in an indoor aquarium setup. However, the males of most species are generally slightly smaller (9 to 10 inches) than the females and may do well in large tanks or outdoor ponds. Cattle watering tanks, the 300-gallon size or larger, are needed to house an adult river cooter of either sex. Plastic tanks are preferable to metal, as cooters will make a racket in a metal tank. Water depth should be 1 to 2 feet or more for adults, but a basking and resting site must be provided. Be aware that the water temperature in summer in large outdoor, above-ground tanks can get too warm if not partially shaded. Upon maturity, males can be easily distinguished from females by their long foreclaws.

As avid baskers, cooters require a basking platform, a warming light source and full-spectrum UVB lighting if kept indoors. Provide a basking site of 85 degrees Fahrenheit and a water temperature of 75 degrees. Cooters are strong swimmers, particularly the river cooters, and a 3- to 4-inch juvenile can be kept in a 20- or 30-gallon aquarium, filled two-thirds to the top. The basking platform must allow cooters enough room to stretch out and fully dry their shell and plastron to avoid shell rot.

Cooters can be kept in fenced outdoor ponds that keep them in and predators out. In-ground, plastic-lined backyard ponds, measuring 5 feet long by 5 feet wide or more in size, work well for a pair. However, monitor pairs to make sure that the male is not consistently harassing the female. Many turtlekeepers only put their pairs together during the breeding season. Plastic-lined ponds are particularly nice, and the edges can be lined with smooth rocks to provide basking locations. Given that cooters are primarily herbivorous, it may be a challenge to keep potted aquatic plants, such as water lilies, from being consumed. However, cooters are less likely than other turtles to harass decorative fish. With the exception of pond cooters, which are often found in tannin-stained waters, the river and red-bellied cooters will prefer clear water.

What To Feed River Cooters

In general, all cooters are omnivorous as hatchlings and juveniles. I have raised hatchlings to 6 inches in size on a diet of ReptoMin and Mazuri Turtle Chow. Products that contain dried invertebrates and crustaceans, such as Gammare species, may enhance some of the red coloration found in some river and red-bellied species. I have seen juvenile red-bellied cooters eat insects, snails, crayfish, earthworms and tadpoles. Romaine lettuce makes a nice supplement that can be left for periods of time in the actual housing container. Other foods should be given in a separate feeding container to minimize water fouling.

As cooters mature, they become more herbivorous. Larger river cooters maintained in captivity prefer tortoise chow over turtle chow. In addition, they will accept romaine lettuce and other greens. In the wild, river cooters feed primarily on eelgrasses (Vallisneria spp.) and elodea (Elodea spp). While snorkeling in clear stretches of the Savannah River, I’ve seen large adult river cooters feeding on stands of eelgrass. Turtles will bite onto a large blade and then shred it as the river current pulls them downstream.

Pond cooters are known to eat aquatic plants commonly found in their more still-water habitats, including coontail, arrowhead and duckweed, as well as at least two introduced plants, water hyacinth and hydrilla. Red-bellied cooters will also eat water lilies and pickerelweed. Therefore, keeping cooters with aquatic plants in either indoor aquariums or outdoor ponds may prove a challenge.

Occasionally, river cooters consume crayfish in the wild, as demonstrated by the presence of crayfish parts in the fecal samples of wild-caught animals. Whether the cooters consumed the crayfish live or scavenged the shells is unknown. In any case, a calcium supplement, such as cuttlebone, should be provided for captive turtles — they will nibble on it as they desire. Adult river cooters seem to prefer Mazuri Tortoise Chow over the freshwater turtle diet; in my experience, red-bellied cooters prefer the Mazuri Freshwater Turtle Diet.

The river cooter is subject to environmental impacts, including unnatural flooding regimes due to upstream dams, aquatic pollution and intentional killing for sport by shooting (called “plinking”) cooters from basking sites. This, of course, is unacceptable and should be outlawed by state wildlife agencies. Many female cooters are killed annually on highways while searching for appropriate nesting habitat. The Suwannee cooter once occurred in large numbers in the Suwannee River system but has been reduced in number by harvest for food. The creation of large reservoirs on many southeastern rivers above the Fall Line has allowed the pond cooter to exist outside its native range where it may hybridize with the river cooter. Thus, the already confusing taxonomy of cooters may be even more difficult to understand because of human manipulations of their natural habitat.

Conservation-minded turtlekeeping is achieved by buying captive-bred hatchlings from a reputable breeder. Removing adult cooters from the wild damages the long-term viability of turtle populations, and wild-caught cooters are skittish and powerful. They will quickly destroy any captive housing setup.

Pond cooters in South Carolina and Suwannee river cooters in Florida have been seen constructing “satellite” nests. The female digs one main chamber bordered by one or two satellite nests a few inches to each side. Most of the eggs are deposited into the main nest, but one to three may be deposited into each satellite hole. The precise significance of this nesting behavior has not been determined, but it may serve to mislead predators. Florida red-bellied cooters are known to deposit their eggs within the nests of rotting vegetation made by female alligators. When the female alligator guards her nest from predators, the cooter nest is also protected.

The cooters are a colorful and visible part of our aquatic biodiversity. Close-up, their beauty is apparent, especially in the river and red-bellied forms. These animals often occur in large numbers in healthy rivers and ponds, thus playing important roles in aquatic ecosystem processes. Given that these turtles are highly active and live in extensive habitats (rivers and swamps), those of us who choose to keep and appreciate them should consider their space requirements. And of course, observing them in the wild, such as by snorkeling with them or watching them through binoculars, is particularly rewarding and helps us better understand the roles they play in our environment.