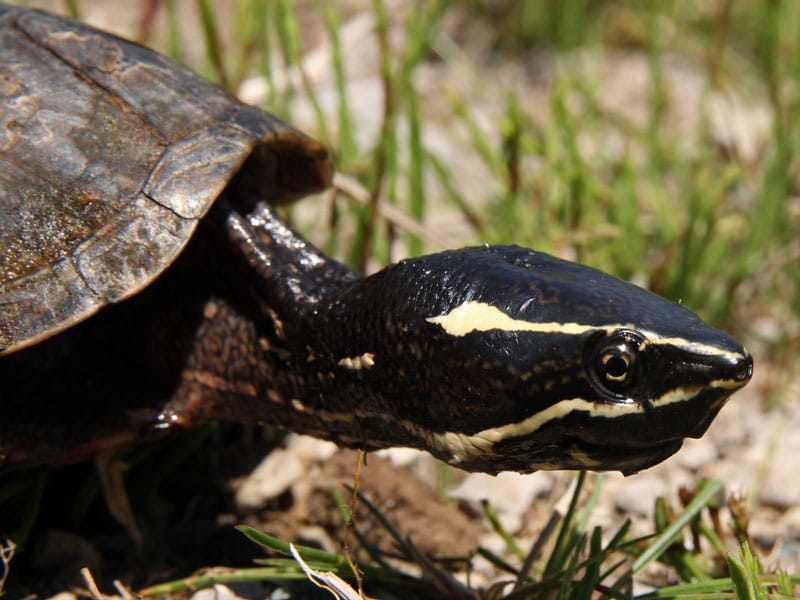 The common musk turtle is a member of the family Kinosternidae. It has a blackish-brown carapace that is highly domed with a vertebral keel. The keel tends to flatten out in adults, but is very prominent in hatchlings and juveniles. The plastron is reduced in size. The head of the common musk turtle typically has two distinct parallel yellow stripes that extend from the nose to the neck, though these may fade in older animals.

The common musk turtle has a wide geographic range in eastern North America, from Florida to Ontario, and west to Texas and Wisconsin. Common musk turtles are found in both slow-flowing sections of stream and river habitats, as well as lakes and ponds. Also called the “stinkpot,” a common musk turtle may emit a foul smell from glands on the corners of the plastron that exude an orange-ish liquid. This usually occurs when a turtle is frightened or startled, and often declines in pets that receive frequent handling.

Common musk turtles are often available. It is recommended that you obtain captive-bred common musk turtles from a reputable reptile dealer, as wild turtles should not be removed from their native populations.

Although it is not known for certain, common musk turtles are suspected to live 30 to 50 years in the wild. Males are presumed to become sexually mature by 4 years of age, whereas females may take up to 10 years to reach sexual maturity.

A 20-gallon aquarium with a submersible canister water filter—such as a Fluval 2Plus filter—can house one adult common musk turtle. A 40-gallon tank can house a pair (and a Fluval 3Plus underwater filter would be able to handle the filtration). Housing two male common musk turtles in the same tank is not recommended. Keeping one male and one female in a tank may require that the two be separated if the male shows excessive interest in the female and begins to relentlessly harass her.

Use non-chlorinated water in the enclosure; a depth that would allow the turtle’s hind legs to touch the bottom while still allowing it to stretch slightly (without having to paddle water constantly) to breathe at the surface is recommended. Though common musk turtles may not choose to leave the water, a floating dock or other haul-out area should be provided should they want to bask. 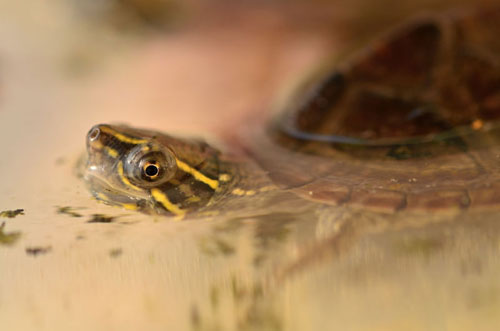 Although it’s nearly entirely aquatic and seldom leaves the water, a basking area should still be provided for a pet common musk turtle.

As mentioned, common musk turtles do not always emerge from the water to bask, but a basking light is still essential for captive turtle health; position it above the spot the turtle would bask should it choose to do so. The temperature in this hot spot should be about 90 degrees Fahrenheit. A ceramic heat emitter in a metal dome clamp light can be used to raise the ambient air temperature in the enclosure to the mid-80s.

High-quality UVB bulbs (available in stores that sell reptile supplies) are required to help turtles metabolize calcium and avoid vitamin A and D3 deficiencies. Keep lighting on a 12-hours-on/12-hours-off cycle to mimic natural conditions. A submersible heater should be used to maintain water temperature at 72 to 78 degrees. 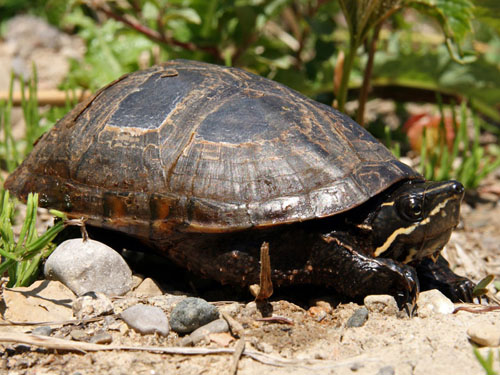 A frightened musk turtle may be inclined to nip a handler, so hold it near the rear of the carapace and be wary of the long neck.

Substrate is not required when keeping common musk turtles, and a bare-bottomed tank is also easier to clean. Hobbyists who want a more attractive, naturalistic turtle enclosure can use medium-sized gravel.

Wild common musk turtles eat a variety of small snails, mollusks, crayfish and aquatic insects such as dragonfly and damselfly nymphs. They will also actively pursue small tadpoles and terrestrial insects that fall into the water. They will occasionally consume plant matter such as Elodea species or duckweed. Pet common musk turtles will eat earthworms, cut-up fish and shrimp, crickets and bloodworms.  Most pets will eat pelleted turtle foods, as well, including Reptomin and Mazuri Freshwater Turtle Diet.

Common musk turtles may occasionally attempt to bite, so care should be taken in handling them. Keep your fingers toward the rear of the carapace to minimize the likelihood of a nip, but common musk turtles have long, flexible necks, so be careful. And remember the previously mentioned reason why this turtle is also called the stinkpot.