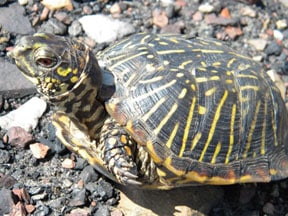 Purchasing captive-bred turtles and tortoises whenever possible is always recommended.

Many wild populations of chelonians (turtles and tortoises) are in serious trouble. Deforestation, disease and over-collection for the Asian food trade, as well as the pet trade, all play a role in the problems wild chelonians face. For this reason, the sale of wild-caught chelonians as pets to the general public is often discouraged by conservation organizations and chelonian groups. While wild-caught reptiles are often less expensive than their captive-bred counterparts, purchasing captive-bred reptiles whenever possible is always recommended. In addition to helping take some pressure off wild populations, buying captive-bred turtles and tortoises usually results in the purchase of a healthier reptile that is already acclimated to captivity.

This article attempts to characterize wild-caught and captive-bred chelonians, so that hobbyists can choose wisely and encourage dealers and stores to stock captive-bred animals. When considering the purchase of a turtle or tortoise, the price, appearance, volume of reptiles being sold, and the size and/or age of a reptile may help you to determine whether it is captive bred or wild caught.

It is often considerably cheaper to harvest wild chelonians and ship them halfway across the globe than it is to breed them in captivity. Captive-bred juveniles, therefore, are usually more pricey than their wild-caught adult counterparts. Considering the time and money necessary to breed, hatch and raise most tortoises and turtles to adulthood, one realizes how valuable a captive-bred reptile, even a juvenile, can be. Reputable breeders will also regularly obtain state and federal permits and keep detailed records of breeding, hatchings and sales, which also takes time and money. It’s no surprise, then, that a 5-inch, captive-bred, red-footed tortoise might sell for more than $200 in a pet store, while wild-caught foot-long adults could cost less. The extra cost, though, is worth it to people who want to purchase the healthiest animals possible. Otherwise, they may pay less for a pet, but possibly more in veterinary bills, because wild-caught animals may be heavily parasitized, undernourished, immuno-compromised and too stressed to eat.

It is illegal to import into the United States turtles under 4 inches in carapace length for commercial purposes, so most hatchlings and juveniles seen in the U.S. are captive bred. Many adult and sub-adult reptiles, on the other hand, are wild caught. Two turtle species deserve special mention: North American wood turtles and spotted turtles. Before you purchase adult turtles of these species, ask the seller for documentation, such as breeding records or proof that the turtles are legal, long-term captives (LTC). Otherwise, you risk purchasing an illegal turtle.

With the exception of certain tortoises, namely sulcata and leopard tortoises, and some species of North American water turtles, such as sliders and cooters that are raised on farms in the southern U.S., many chelonian species are not currently being mass produced. Some, such as Russian tortoises and spotted turtles in particular, lay small clutches, which makes future mass production of captive-bred specimens unlikely. It is unlikely, for example, that a store would have five sub-adult, captive-bred Russian tortoises for sale at the same time, especially if they’re selling for less than $125 each. If you are after captive-bred animals, be wary of adult chelonians that are sold in bulk.

Learn your state regulations and the current market as it applies to chelonians. Some states still allow the commercial harvest of turtles native to the state, and adult specimens of these species will show up more often in the pet trade. Wild-caught adult false map turtles and western painted turtles are commonly sold, for instance, because their native states still allow commercial harvesting. A few years ago, it was common to find adult diamondback terrapins in the pet trade, but since all native states have banned commercial harvesting of them, you’ll mostly find captive-bred juveniles for sale now (and you should be suspicious of any adults for sale, as they may be illegally wild caught).

Remember, wild-caught reptiles are more likely than captive-bred reptiles to be highly stressed and to harbor parasites and/or disease. Can you afford the possible cost? Are you willing to put the existing reptiles in your collection at risk? This is a highly personal choice that only you can make, but a captive-bred reptile not only does not affect troubled wild populations, it can be a bargain in comparison to the time and money that may be needed to care for a wild-caught reptile. If you’re in doubt as to whether a reptile is captive bred or not, consult a trusted resource before purchasing. Some pet store personnel will be proud to tell you that they offer captive-bred reptiles. Others will be honest and admit that their reptiles are wild caught. Others may not be as honest, or they may not even know. If you need to research a bit more to decide for yourself, consider joining one of the many turtle and tortoise online discussion groups out there. Many have a core of experienced keepers and experts who can help you.