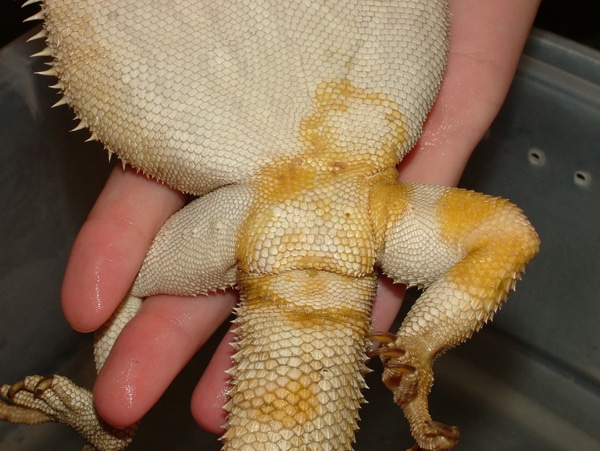 Yellow fungus, Chrysosporium anamorph of Nannizziopsis vriesii, CANV Causes CANV is likely the underlying cause of many infections in older lite

CANV is likely the underlying cause of many infections in older literature which attributed the disease to other fungi. Advances in fungal culture and identification helped distinguish CANV as a cause of disease in reptiles, one of the few pathogens that have fulfilled Koch’s postulates. (This means the fungus was recovered from a reptile showing clinical signs, was grown in a laboratory, was administered to another reptile, and that reptile went on to show the same clinical signs from which the fungus was recovered and demonstrated to be the same as the original isolate.) Recently there are reports of other species of Nannizziopsis being recovered from ill reptiles. 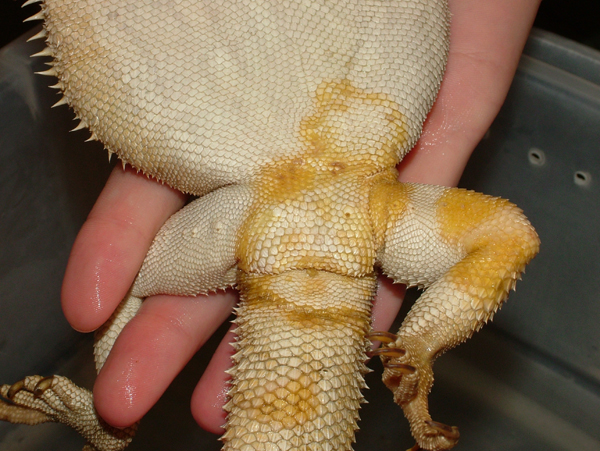 All reptiles are at risk of infection, particularly when exposed to dirty conditions, crowding, and stress.  Bearded dragons, green iguanas, veiled chameleons, Uromastyx, and green water dragons are commonly seen victims of CANV. Aquatic reptiles may also be affected as noted in one published report of illness and death of tentacled snakes from CANV.

CANV often shows up as a small yellow to brown crust on the surface of a few scales that in time gets larger. Other yellow to brown crusts may appear elsewhere on the body in a random fashion.  Occasionally, an early sign of CANV is an irregular shed that leaves behind dull scaled with a roughened appearance. In some reptiles it may result in a shedding storm where the reptile becomes opaque almost as soon as it has shed. As the disease progresses, it may become an internal infection and lead to poor appetite, weight loss, and death. 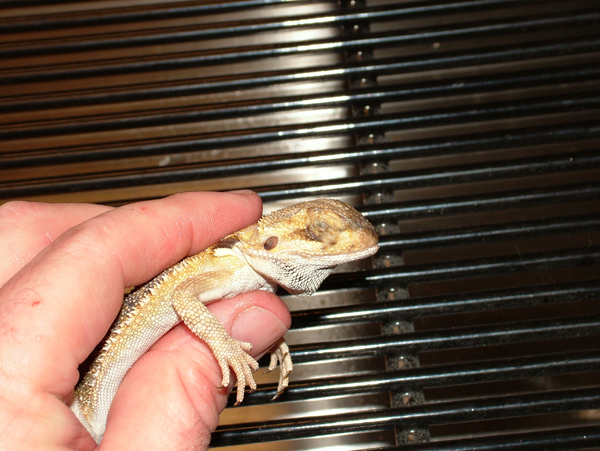 If you have a CANV positive reptile, any cage mate needs to be watched closely for signs of disease.

Predisposing captive conditions and/or other factors

CANV is associated with stress, often seen in reptiles kept under crowded unsanitary conditions. It’s often seen in those species of lizards which are raised in groups, shipped in groups, or displayed for sale in groups. It is also thought that toenails and minor bite wounds associated with intraspecific interactions under these crowded conditions results in damage to the skin and inoculation of the fungus. Sanitation may be compromised with high populations of lizards in the same cage which in turns increases the likelihood of a lizard being exposed to the fungus.  Furthermore, crowding causes stress which results in suppressed immune response, so a lizard may not be able to fight even a low level inoculation of fungus. CANV has been recovered from seemingly healthy reptiles. It has also been a cause of illness in reptiles that were kept under good husbandry.

Diagnostic tests a veterinarian may recommend

A skin scrape may be recommended to rule out parasites like mites and to check for signs of other kinds of bacterial and fungal infections. A PCR test sent to a specialized lab may confirm the presence of CANV DNA. A veterinarian may suggest bloodwork to better assess your reptile’s health and rule out a serious internal illness. A skin biopsy may be needed to rule out other possible causes of skin discoloration.

Isolate: If you have a CANV positive reptile, any cage mate needs to be watched closely for signs of disease. You should consider separating the cage mates to reduce the risk of cross-infection from the obviously ill one to the seemingly healthy one. Another reason to separate them is to reduce competition between them. Sometimes there are subtle social interactions that create stress and immunosuppression, and make cage mates more susceptible to infections. Other exposed reptiles should have thorough veterinary examinations and any skin lesions should be assessed to rule out CANV as the underlying cause. 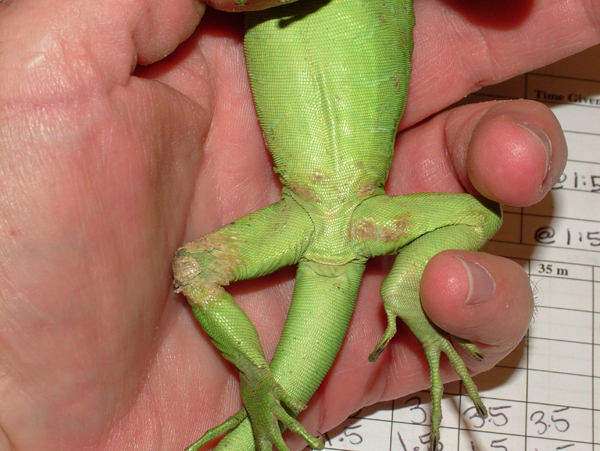 Quarantine: Any reptile that arrives with a skin lesion or that develops a skin lesion while in quarantine should not be released until CANV is eliminated as the likely cause.

Proper hygiene and sanitation: Proper sanitation and hygiene are key risk reducers. As with other infectious diseases, a reptile is better able to resist an infection if it is fed the proper diet and is given excellent husbandry (i.e., a thermal gradient, appropriate lighting, the right range of humidity, hiding spots). Avoid purchasing reptiles kept under crowded conditions, particularly where there are obvious skin lesions on other specimens sharing the same container. Unfortunately, CANV is commonly present in the environments of captive reptiles and some reptiles inexplicably break with the disease.

Treatments a veterinarian would likely recommend

Voriconazole is an oral antifungal drug that has shown promise but there are few truly long-term (>24 mo) success stories at present. Oral combination treatments of terbinafine and itraconazole, or oral treatment with either alone, have not proved effective long-term. Skin lesions should be treated with povidone iodine once or twice daily. Topical treatment with antifungal drugs such as terbinafine, miconazole, or itraconazole, have not proven effective.

Guarded to poor. Most infected reptiles die within 12 to 18 months, even with treatment. The few that have survived long-term are often on long-term medical therapy and must be considered possible threats to other reptiles for the rest of their lives. Until more is known about treatment, CANV should be considered a life-threatening illness.

Editor’s Note: Dr. Wright died unexpectedly on September 26, 2013. He was 51. He had just finished a series of 50 disease profiles for ReptilesMagazine.com when he passed.