Everything you need to know about Cagle's map turtle (Graptemys caglei).

There are map turtles. And then there are map turtles! Every species and subspecies is beautiful, but some are just so attractive that they are hard to describe. It’s even harder to explain why any are considered pretty because all are variations of one of two themes: greenish markings against a gray or olive background, or yellow markings against a gray or olive background. Perhaps it is just that every marking on map turtles is so precise and clean-cut that the turtles can’t be described as anything but “flat-out pretty.”

When discussing the beauty of these turtles, we come nose to nose with the little Cagle’s map turtle, one of the more western members of the clan.

Cagle’s map turtle is a narrow-headed species. That simply means females do not develop an enlarged head as they age. The carapace is olive-green to olive-brown, and each scute bears many light, maplike markings. The saw-backed vertebral keel has black projections, and it is particularly well-developed on males and juveniles. Old adult female Cagle’s map turtles have the least conspicuous keels. Posterior marginals are strongly serrate. The plastron is creamy-yellow, and the scute seams are dark.

The skin of Cagle’s map turtles is dark but busily patterned with many light creamy-yellow stripes. Both narrow and wide stripes are on the limbs. The head, including the chin and throat, is profusely patterned with light yellowish lines and spots. These, too, are both broad and narrow. The postorbital crescents (the markings behind the eyes) are particularly broad. Extending posteriorly as a “V,” these broad lines converge at the back of the head. Three stripes are between the eyes, other stripes are below the eyes, and four curved stripes contouring the jaw line mark the chin. Longitudinal yellowish stripes vividly pattern the neck and throat of Cagle’s map turtles. 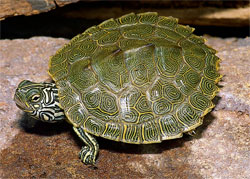 Although a few species of this genus range widely, Cagle’s map turtle, like many others, has a relatively small range. It inhabits only the creeks, rivers and riverine impoundments of the Guadalupe and San Antonio river systems in south-central Texas. It occurs in areas where the river and creek bottoms are either limestone or mud.

Cagle’s map turtles breed in the spring and early summer. Courtship involves a swimming male facing a female and vibrating his head against her snout and cheek. Nest sites are usually quite close to the water. Females seeking nesting sites are very wary and unhesitatingly dash back to the water if startled. Female Cagle’s map turtles typically produce one to three clutches containing two to seven eggs. The eggs incubate through the summer months. In nature, the hatchlings may be encountered from early September on. Like other map turtles, the sex of the hatchlings is determined by the nest temperature.

Texas lists Cagle’s map turtle as threatened, so it cannot be taken, possessed, transported or sold in the state. It is also a federal candidate for the Endangered Species List. Some private breeders outside of Texas work with this species, so it is sporadically available in the U.S. pet trade.

One to several hatchlings of Cagle’s map turtles thrive in a properly set up 10- or 15-gallon aquarium. A swimming area and an easily accessed haul-out area should be provided. Water temperatures of 74 to 84 degrees Fahrenheit and a basking hot spot of 88 to 100 degrees are fine.

I suggest illuminating and heating the basking site with a mercury vapor bulb. These bulbs fit into incandescent sockets and provide full-spectrum lighting. Although the bulbs will continue to produce light, their UV output diminishes after a period of four to six months. Change the bulbs according to the manufacturer’s guidelines.

Cagle’s map turtles are powerful and agile swimmers, so they easily negotiate deep water. The swimming area can be 6 to 12 (or more) inches in depth. Deeper water provides the turtle with more opportunities for “aquabatics.” Remember, the more turtles or the bigger the turtles you have, the more waste they will produce and the more often water changes will be needed. Healthy water conditions are probably more important to the overall well-being of map turtles than to any other turtle group.

Map turtles in general (and certainly Cagle’s map turtle is no exception) are very susceptible to shell rot. Perhaps this is because pathogens are continually carried away by water currents or because map turtles bask in full sunshine for long periods almost every day they are active. Bacteria living in unsuitable water quickly cause shell lesions, pitting and edema. It is imperative that aquarium water contain no more than minimal amounts of nitrates, nitrites and ammonia. Although a strong filtration system helps immensely, nearly total water changes once or twice weekly are still necessary to remove the turtles’ waste products. Monitor the water quality carefully and often.

Although Cagle’s map turtles are relatively small, the size of their enclosure needs to be increased as they grow. An adult pair should be provided with at least a 50-gallon tank, though 75 to 125 gallons is better. A 125-gallon tank can hold three or four adults.

Temperatures allowing, Cagle’s map turtles appreciate outdoor facilities allowing access to natural sunlight. In most cases, outdoor facilities are much more easily maintained than indoor facilities. Water changes in outdoor setups can be made by simply siphoning water onto the ground or removing a drain plug if a stock tank is used. Water from a garden hose refills the receptacle.

Stomach content analyses of wild Cagle’s map turtles have revealed they consume considerable plant material, but it is thought that the plants are ingested incidentally as the turtles dine on caddis fly larvae, snails and other aquatic organisms. Captives seldom eat aquatic plants, but they provide visual barriers and a sense of security for the turtles. Plants such as Elodea and Cabomba may be collected from the wild or purchased inexpensively from almost any aquarium shop.

Wild-collected plants often harbor aquatic insects, a favorite dietary item of Cagle’s map turtles. Make sure the plants harbor no leeches. If you accidentally introduce a leech into the tank and it attaches to a turtle, remove the turtle from the water, and dab the leech with table salt. Once the leech releases its hold, remove and destroy it. Healthy, growing plants kept indoors need bright lighting. If the enclosure is outside, natural sunlight is fine.

Like other map turtles, Cagle’s map turtle is almost exclusively carnivorous or insectivorous. Captives should be fed fresh minnows, tadpoles, chopped night crawlers, high-quality pelleted fish foods, crickets and mealworms. Several small feedings during the course of the day are better than a single large feeding.

Remove uneaten food promptly; if it’s allowed to decompose in the tank, it adds to the bacterial content of the water.