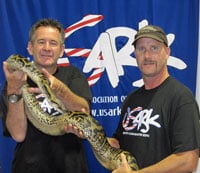 3. Reptile breeding businesses generate hundreds of millions of dollars annually. The sale of captive-bred pythons, including Burmese pythons, is a mainstay of the industry. Reptile breeding businesses are interlaced and interconnected with the American economy. Many small businesses exist that create caging, equipment and dry goods for pythons. Raising rodents to feed captive reptiles is a billion-dollar industry, and these businesses exist throughout the country. Nationwide tradde and reptile shows and other events are held 52 weeks a year.

4. The U.S. has a vibrant trade in reptiles and is responsible for 82 percent of this trade worldwide. Reptiles are provided to high-end collectors, zoos, research facilities, TV and film, as well as for export to Asia and Europe. The U.S. is the largest producer of captive-bred reptiles for export worldwide.

6. Most importantly, the possession and maintenance of Burmese pythons is a local issue, not a national issue. Most states, counties and cities already regulate possession of specified exotic species that are of ‘concern’ in that particular geographical location. In many states (including Florida), the possession of Burmese pythons requires permitting, inspections, secure caging, escape prevention, and safety protocols – there are penalties for violations. The United States Association of Reptile Keepers (USARK) continually promotes state legislation to address professional standards and is currently developing internal accreditation protocols to certify its member handlers and breeders. Our most recent efforts resulted in model legislation being signed into law in North Carolina. Additionally, we expect legislation to be introduced in both South Carolina and Virginia in 2010.

7. The Lacey Act is the most inflexible of statutes. It allows for no commercial trade of any kind. With respect to the Burmese python there are already thousands of these animals in the U.S. These are the result of captive breeding that has occurred for more than thirty years. S. 373 must be modified to account for this existing commercial industry. Further import of these species is not a priority for USARK, as imported animals are generally low quality. However, ensuring trade in resident pythons among qualified commercial handlers and breeders must be safeguarded.