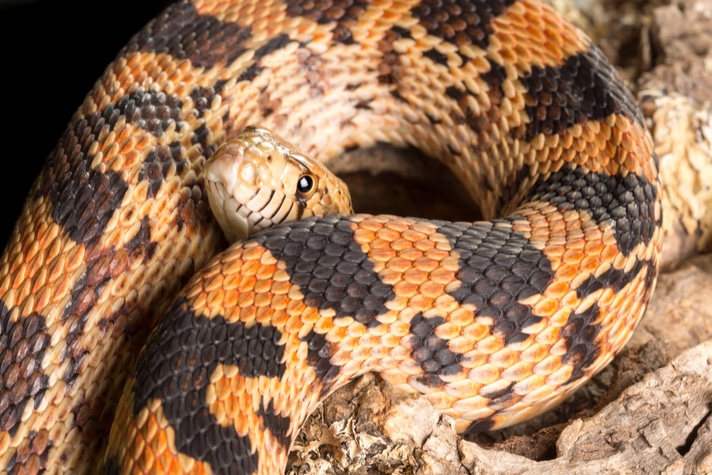 Bullsnakes (Pituophis catenifer sayi) are very easy to keep in captivity, especially if they are from captive-bred stock. If you follow a few simple husbandry techniques, these large members of the colubrid family can be rewarding and enjoyable to keep.

Bullsnakes, as well as their close relatives, pine and gopher snakes, are members of the Pituophis genus (pit-chew-o-fis, meaning phlegm or mucus snake). Their range is one of the largest snake ranges in the world, stretching from the north central states of Mexico, east to Indiana, west to the Rockies and north into Alberta and Saskatchewan. They prefer soft, sandy prairies throughout most of their range and sparse desert scrub in their southern range.

Overall, they are popular snakes, but they do have a somewhat varied reputation. I happen to love them so much that I have worked with them for the past 20 years. Often, bullsnakes are all that I have in my herp room, as is the case with my entire 2010 breeding program. On the flip side, others see them as messy and aggressive, ferocious eaters, and, well, just downright stinky. Out of the hundreds of bullsnakes I have kept over the years, and of the 50 or so I have now, I have found a simple solution to these issues.

Aggressive behavior in captive-bred bullsnakes is a generalization at best. Yes, in captivity they will often display by hissing and rearing their heads back, but as we’ve all noticed, different snakes have different personalities. For example, one of my albino white-sided (snow) bullsnakes is one of the most gentle, personable snakes I have ever worked with. She is more than 6 feet long now and has never once hissed or displayed — even as a hatchling. She is my first pick for educational shows and seems to enjoy being handled. Most of my bullsnakes are like her. On the other hand, I have another female that is heterozygous for lavender snow and is now almost 61⁄2 feet. I have nicknamed her Jackie, as it used to be that every time I would slide her enclosure open, she would spring out, mouth open, and essentially become a “Jackie-in-the-Box.” This behavior can be attributed to an overly aggressive feeding response due to her former handler only opening the enclosure for feeding time. Jackie’s reaction is not blatant aggression, as might be easily construed by inexperienced keepers; it is a result of her associating opening the enclosure with food.

Snakes only interacting with their handlers on feeding day do not have a comfort level around people. This problem is easily fixed by simply working with the snake. I began taking Jackie out of her cage at least twice a day to get her used to being handled and to break her of her aggressive feeding response. I’d let her crawl hand over hand until she stopped hissing and became aware of her surroundings without feeling threatened. On feeding day, I use a hemostat to offer her the prey item and stand to the side of her enclosure, so that she doesn’t associate my presence with food. When I started this process with her, I wore two thick gardening gloves. Now, I can easily slide her enclosure open and free-handle her.

Hatchling snakes are notorious with their displays with a few exceptions. I have a hatchling pair of Omaha axanthic bullsnakes that simply don’t display at all. By way of comparison, I have a pair of fire bulls (Stillwater hypo X Kingsville red) in which the male only does it occasionally, but the female will hiss and snap so aggressively that she’ll actually hurl herself onto her back. It’s really quite comical. For the most part, as is true with all animals — humans included — they will mellow with age. Even better, the more you handle them and enjoy them, the less aggressive they usually become.

The messy reputation of bullsnakes can also be managed. In my herp room, I have an air purifier running constantly. This not only takes impurities out of the air and improves the overall air quality for my animals, but it also traps and neutralizes airborne scent particles. I also clean each cage as needed. Seems oversimplified, but a lot of hobbyists seem to have a “cleaning day” once a week or so. This doesn’t work with bullsnakes. I check cages every day and simply remove any “presents” left in the cages.

Unless the enclosures are a real mess, I deep clean them twice a month, removing the old substrate and spraying the enclosure with an ample mist of Healthy Habitat, a 100-percent-natural cleaner and deodorizer from Natural Chemistry, Inc., before wiping the enclosure clean and adding fresh substrate. Once every other month, I soak each enclosure in hot water for about an hour and let it air-dry. I will also run all water dishes through the dishwasher without detergent. The hot water cycle cleans and sterilizes the dishes without any chemical residue.

I have experimented with substrate over the years — from plain newspaper to packing paper to recycled paper bedding with baking soda — and I have found that good old aspen bedding is easy to spot clean. It smells fresh, and it is hygienic and inexpensive. It is easier for the snake to burrow in than newspaper.

I use relatively smaller than usual water dishes in each of my enclosures. With bullsnakes, water dishes are for drinking and not for soaking. If the water dish is too big, they have a bigger chance of fouling the water, and in the egg-laying season, laying their eggs in the water dish. With these simple husbandry procedures, I have had people come to my house without even knowing that in the next room, there are more than 50 snakes.

Bullsnakes have ferocious appetites. They eat readily and grow fast in captivity. In raising babies to adulthood, I have found the following formula works to ensure that the snake is growing at a normal, healthy pace without “power feeding” them to get them to breeding size quicker. I feed my babies two or three pink mice every four days for the first month of their lives. I graduate them to two fuzzy mice twice a week for about five months, and then move them up to hopper mice twice a week for the next six months. After the first year, the snake should be close to 3 feet long and can easily take one or two adult mice or smaller rats once a week. In the second and third year, as the snakes are reaching sexual maturity, one mid-sized to large rat may be offered each week instead of multiple mice.

The ideal temperature range for bullsnakes would be the high 70s (Fahrenheit) in the hotspot and low 70s at the cool end. Any cooler and they will not digest properly; any hotter and they become less active and do not feed as well. Generally speaking, this is basic room temperature. Humidity is not as important with bullsnakes as it is with other snake species; however, I increase enclosure humidity when the snake is in shed by simply misting it twice a day or so to ensure a clean, easy shed. A photoperiod (night and day cycle) is important to every animal. I have a light set on a timer in my Pituophis room (not in the individual enclosures) that is on for 12 hours and then off for 12 hours.

As one of the continent’s top five largest snakes, along with the growing number of morphs available to breeders and the ease with which they can be kept, it isn’t hard to see why the bullsnake is loved by those that know them. As time goes by, this snake will no doubt gain more and more popularity with snakekeepers all over the world.