Golden Greek tortoises (Testudo graeca ssp.) are easy to sex once they reach about 3 to 4 inches in plastron length. At that point males develop long tails in which the vent opening ends up well outside the edge of the shell when the tail is extended. They also generally walk around with the tail tucked up sideways under the shell. Males seem to be fertile once they cross the 4- to 5-inch mark or so in plastron length. 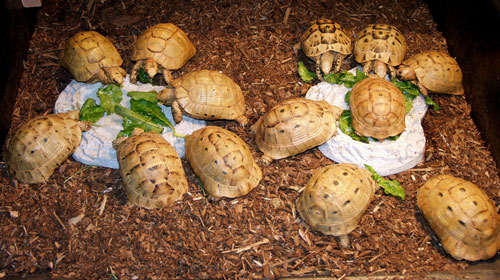 Females retain the short, wide, buttonlike tail of their youth, and unless they’re harassed, they generally walk around with it pointed straight out. The plastron joint between their rear and central plastron plate also softens in mature females, transforming it into a slightly flexible hinge. This allows the rear plastron to open wider during egg laying. Most females need to be at least 6 to 7 inches long before they become sexually mature.

Golden Greeks, like many tortoises, need time to settle in and adjust to new surroundings before they’ll begin breeding and egg laying. Most golden Greek females seem to need at least a full year or more to adjust to a new home and set up their hierarchies. Thus for the best breeding success, you would do well to set up your female groups as soon as possible, and then leave the groups intact and in the same pens year round.

We at Deer Fern Farms house our golden Greeks in medium-sized Waterlandtubs enclosures. Measuring 76 inches long, 50 inches wide and 32 inches tall, the “water” sections accommodate six females per tub. Females need a larger enclosure so they have room to nest, and the built-in deep area of the “water” section is ideal for nesting. Undisturbed by amorous male tortoises, females have time to set up hierarchies, which they do by false mounting each other. Once established, they go on to generally live peacefully in these small groups.

Golden Greek males are kept apart from females in the smaller “land” sections of the tubs. Measuring 55 inches long, 24 inches wide and 9 inches tall, these sections also accommodate six tortoises per tub. Males seem to remain relatively nonaggressive towards each other when housed communally with no females present. They still set up hierarchies by mounting each other, but these skirmishes generally stop short of progressing into biting matches.

It’s unclear how much of a “winter” golden Greek tortoises need, but they do need at least some variability in temperature and light to induce breeding activity. Beginning in late October we shorten the day length by one hour per week until we’re down to six hours per day at the beginning of December, give or take a week. We maintain that for about a month and then reverse the process.

During this period we let daytime temperatures run in the low 80s (degrees Fahrenheit), and nighttime lows dip into the mid-60s. The tortoises can occasionally take much colder temperatures at night (and may have increased fertility as a result), but you always must heat the enclosure back up into the low 80s during the day.

We continue to offer food every other day, and most golden Greeks continue to eat but at a reduced rate. A few weeks after daylight hours grow longer again and daytime temperatures are returning to normal, the tortoises begin eating in earnest.

We begin adding two male golden Greeks to each pen of six females for one week at time. Then we pull them out to give the females a week of rest. Next, two new male tortoises are added to the females’ pen, and the cycle continues until early summer or until we get the first clutch of eggs. Then males are retired until late August or early September when the whole procedure is repeated.

Golden Greek tortoises dig shallow nests in hard soil, but they dig deep nests in the soft soil usually offered in our indoor nestboxes. We use Zoo Med Excavator Clay Burrowing Substrate cut 50-50 with washed playground sand and then cut this mix with 20 percent peat moss. This substrate is placed in a 10-inch-deep depression in the tortoise pen and kept slightly damp during the breeding season. Females find this spot more attractive if you place a large log or similar structure in the center of the egg-laying area.

Golden Greek tortoises are great at hiding their nesting sites, so we simply dig up the entire nesting area once per week from March through August. The tortoises can lay two to six eggs in from one to four clutches during this period.

Golden Greek tortoise eggs are placed in HatchRite incubation media cut with 20 percent dry perlite and 5 percent activated charcoal. Sealed plastic food trays hold the eggs and incubation media, and they’re incubated at 86 degrees. If you prefer to hatch mostly males, drop the temperature to around 82 degrees. For predominately females, raise it to 90 to 92 degrees. If all is well, the eggs change from a smooth gray to a bright white within a few days, and they hatch in about 65 to 75 days depending on the incubation temperature.

Hatchling care is similar to that of the adult golden Greeks with the exception of restricting them to much smaller enclosures to better monitor their feeding.