Mating is inevitable if males and females are kept in the same enclosure. Males are relentless in their attempts to mate, which sometimes results in aggression from females. Occasionally, a male displays his reproductive organ. Usually dark and literally shaped like a blooming flower, it can measure up to 3 inches long. Its appearance may shock turtlekeepers not familiar with it. 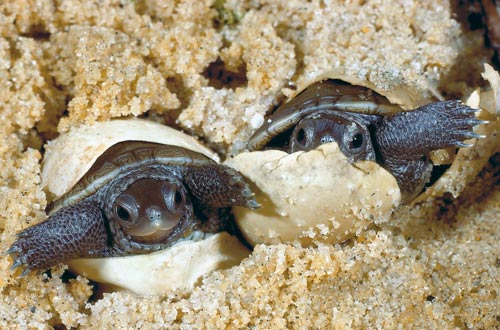 After hatchling diamondback terrapins emerge from their eggs, avoid handling them until they have absorbed most of their yolk sacs.

Similar to wild adults, captive diamondback terrapins brumate during the winter and become sexually active when spring begins. Mating has occurred in 1-foot-deep waters as early as the end of February in Florida when water temperatures are about 70 degrees Fahrenheit.

Females lay one to three clutches of pinkish-white eggs during the nesting season. Each clutch averages three weeks in between layings. Females prefer damp nesting areas where eggs are deposited 4 to 6 inches beneath the surface, but it is not unusual to find eggs as deep as 12 inches.

Generally, it takes about 60 days for eggs to hatch if they are incubated at 80 degrees. Once the hatchlings pip, avoid handling them until they have absorbed most of their yolk sac. Hatchlings do well in 1 to 2 inches of water.

From personal experience, hatchlings do well in fresh water. However, adding a small amount of aquarium salt is harmless because this practice can keep out unwanted bacteria. I usually add a tablespoon or two for every five gallons of water in my hatchling tanks.

Hatchlings usually do not eat the first two weeks after hatching because they are still absorbing their yolk sacs. Once the yolk sac is completely absorbed, they will accept most commercial turtle pellets for food.