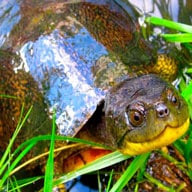 Blanding’s turtles are known to be some of the very first turtles out of hibernation. Because they are so cold tolerant, they can be seen emerging and already basking in early March in many regions; however, they may not begin to feed until April. 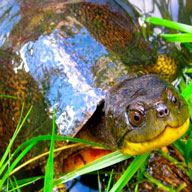 Upon spring emergence, adult male Blanding’s turtles (Emydoidea blandingii) will relentlessly pursue females by chasing them throughout the water and sometimes even on to land. The male’s concave plastron enables him to fit on top of the female’s carapace, where he will grab on tight using his large claws. Mating can last for hours, and during this time, the male will snake his head down in front of the female’s and wave it from side to side. After successful copulation, the pair will separate and move on. Usually by June, on a warm clear evening, the female Blanding's turtle will leave the water in search of a nesting area. Once a site of appropriate temperature and substrate is selected, she will begin to dig her 4- to 6-inch, flask-shaped nest, using her back feet. Depending on the size and age of the female, six to 16 (and sometimes more) eggs are deposited and then covered with the earth. The turtle will then leave the nest, and the eggs to hatch on their own. 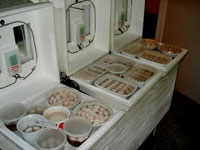 Blanding’s turtles can be bred by using a few methods, but one thing that remains crucial for most keepers is to provide the adults with a period of hibernation. I leave my adults outdoors year-round to hibernate in their pond, where they are exposed to more natural conditions and a yearly cycle. This time of dormancy stimulates the turtles to breed in the spring and again in early fall. For those who are not in an area that experiences a winter, artificial hibernation can be achieved by using a refrigerator. Turtles can be placed in plastic sweater boxes filled with sphagnum moss and water, and then be put inside the fridge. Here, a constant temperature of about 40 degrees Fahrenheit will keep them inactive until it’s time to pull them out.

The turtles should be subjected to a natural temperature decrease, which typically accompanies the change in season. Over the course of six to eight weeks, as you lower the temperatures about 5 degrees each week, they will slow down, cease feeding and continue to bask until the ambient temperature is no longer favorable. In areas where artificial hibernation is a must, the turtles can be brought indoors to a basement or other room, where the temperature drop can be controlled in order to gradually get them ready to hibernate. Dropping it down to 40 too quickly will harm the turtles and may even cause death. Hibernation lasts from late October to late March or early April in the wild. They should be offered a period of the same time length in captivity. When hibernated naturally outdoors, the turtles will wake up on their own and resume normal activities as the weather permits. If artificial hibernation is being used, waking them up can be done by removing the individual containers they are in out of the fridge and placing them in a cool room, such as a basement or garage. After about two to three days, the turtles can be placed in their outdoor water source on a relatively cool day. They can then be left to do the rest on their own. Do not put them outside immediately following hibernation on an abnormally warm day. Doing this on a cooler day will help to continue the gradual warm-up.

Once hibernation has concluded, the turtles will begin their breeding season. Offering hearty meals to the adults four to five times weekly helps to keep them at a proper weight and helps the females with egg production. Offering whole, skinned mice at this time has proven to be successful for me. All parts of the mouse including its bones are consumed and are an excellent source of calcium. Once the turtles are nearing egg-laying time, they begin to ignore food slightly or entirely. At this stage, the females are ready and will begin pacing the land area of their enclosure constantly. They will follow the fence line, sniff the ground, push leaves and twigs aside, and seem restless. This can go on for up to two weeks straight; therefore, they will require a large land area. Typically, they will exhibit this behavior during evening hours and into the night. In my care, the females will usually select an area to nest at between 6 and 8 o’clock p.m. They may dig for quite some time before depositing the first egg.

Once all eggs are laid, I let the female cover the nest and move back to the water. Only then do I carefully dig up and remove the eggs. The eggs are placed in artificial incubation at 86 degrees, and the hatchlings will emerge in 49 to 61 days. Poor fertility of the eggs has been reported by several keepers, and this may be due to inadequate hibernation or too many females and not enough males. In 2007, out of 67 eggs laid by my females, only three were fertile. At the time, only one male was present in the group. The following year, more males were added to the breeding group, yielding better results. Males becoming bored with their female cage mates and not being able to take part in competition with other males may be a cause for this. Keepers should also note that this species may not produce eggs every year like many other North American turtles. Blanding’s turtle females have been known to lay eggs every other year; consequently, small groups may produce no eggs at all in a given year. With larger breeding groups, half the females may lay the first year and the other half the second year. Whether it is three viable eggs or many more, hatchlings will soon be upon you. The neonates are mini versions of the adults that soon take on big appetites. They can be kept indoors in smaller examples of the adult setups and will grow quickly. They will not reach sexual maturity until usually 10 years of age (20 in the wild), but young males will start to exhibit breeding activity and territorial displays at a younger age (between the age of 5 and 7 years old, depending on how fast they’ve grown and what size they’ve attained). Although they are not considered a particularly aggressive species, it is important to watch male Blanding’s turtles closely to be sure that they are not overly stressing any other members of their community.

Hatchlings should be offered food items daily for the first one to two years. Housing multiple hatchlings together usually finds few problems; however, tail nips are common with Blanding’s turtles as aggressive individuals tend to bite the tails of others because they’ve mistaken them for prey. This can be avoided by providing them with enough room to escape one another, and also by keeping them well-fed. Once the sexes of each turtle can be officially determined, it may be necessary to watch the males closely for aggression or even relocate them to another enclosure.

The Blanding’s turtle is a remarkable and heart- warming turtle species to work with. Every year, these turtles suffer in their native habitats as humans encroach and push predators closer to them, resulting in poor reproduction rates. It is through responsible captive breeding and conservation that enables them to still exist today. Should you get the opportunity to keep and even breed these rapidly disappearing creatures, you will constantly be rewarded with doglike personalities, decades of enjoyment and a comical smile that goes a long, long way.

Chris Leone has kept and bred turtles and tortoises for more than 20 years. His work with Blanding’s turtles, Western Hermann’s tortoises and many other species has become a valuable asset to the reptile community worldwide. Visit him and his animals at http://gardenstatetortoise.com