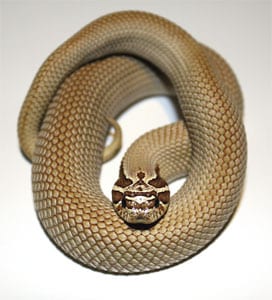 “The superconda was produced from breeding two western hognoses with the anaconda trait, the first proven codominate trait in the species. The name ‘anaconda’ comes from the reduced pattern with only spots in the center of the dorsal scales and the solid-black belly pattern. The trait has endless breeding possibilities with all the vibrant colors and patterns. I produced the first anaconda western hognose in 2004, and I finally produced the first female in early 2007. After a long wait I produced two supercondas in 2008.”