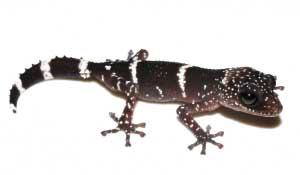 “I got my group of Paroedura masobe over two years ago from a breeder in Europe. My group of captive-bred animals has proved to be quite hardy. I received four eggs last year from one female, three of which were infertile. However, after more than eight months of incubation, I found this jewel in the incubator. I have had better success this year and already have eight eggs incubating.”