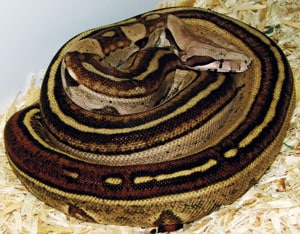 “This super stripe male was produced in 2006, and it shows the typical symmetrical divided stripe that runs along 90 percent of the snake. Our super stripes were produced from a heterozygous pair: a male likely collected somewhere along the Yucatan Peninsula and a Colombian female. The super stripe acts as a recessive trait; however, the heterozygous animals may be radically aberrant themselves. Super stripe boas are highly variable in color and pattern, but most are simply stunning.”