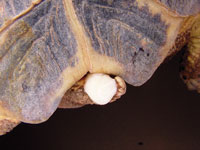 Uric acid is a compound formed out of waste products from protein digestion and metabolism. It combines with different metallic ions found in bodily fluids to form salts called “urates,” which are the white portion of a reptile’s excrement. These urates and other water-insoluble compounds accumulate and grow into large crystals, which eventually form bladder stones. 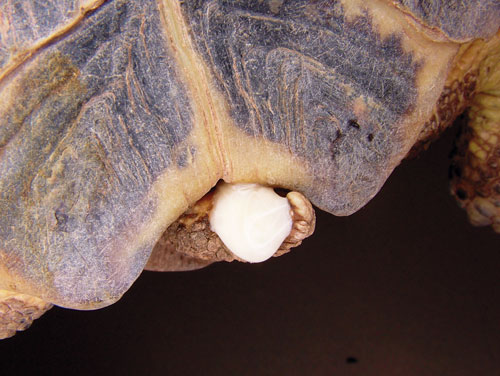 This Russian tortoise is excreting normal liquid urates. Bladder stones develop when these urates combine with other water-insoluble compounds to form large crystals.

Although many different reptiles have bladders, bladder stones seem to be found only in species that produce uric acid as the main waste product. To help understand why, one must consider how uric acid is created.

It starts with proteins. They may be broken down to be burned as an energy source, or they may be digested into amino acids and rebuilt by the body into different sorts of proteins. When proteins are broken down, they initially form a toxic, nitrogen-based substance called “ammonia.”

Animals rid themselves of ammonia in a couple ways. If an animal evolved under conditions where plenty of fresh water is available, the ammonia may be flushed out of the body through urination. That’s one way.

For animals without ready access to water, the ammonia has to be converted into a less toxic form, so it may be stored temporarily before being removed from the body. So the liver converts ammonia to “urea.” This liquid substance requires some energy to create, but it is far less toxic than ammonia. Thus an animal may store urea, usually in the bladder, for an extended period of time and void it when there is water to replace what will be urinated away.

For some desert animals, such as sulcatas and desert tortoises, urea requires so much water to process and eliminate that they would dehydrate and die trying to keep up with protein metabolism. So these animals developed a way to cope. In many reptiles, the liver can convert urea to uric acid.

White and crystalline, uric acid is very insoluble in water, and it doesn’t absorb into the bloodstream. Somewhat like ice crystals in a Slushee, urate crystals are suspended in water and kept in motion by cilia lining the bladder. This process allows the crystals to be removed with minimal water loss to the animal. Most reptiles can shift from ammonia to urea to uric acid depending on how much water they drink and what their diets are.

Now you know what uric acid is, and perhaps you know a little more about how it forms.