Extinction of key species in ecosystems can have a serious snowball effect, often causing other species to become endangered as a consequence. Intervening to prevent this type of occurrence is not easy, but some scientists are now advocating consideration of a controversial new approach, described as “rewilding with taxon substitutes.” 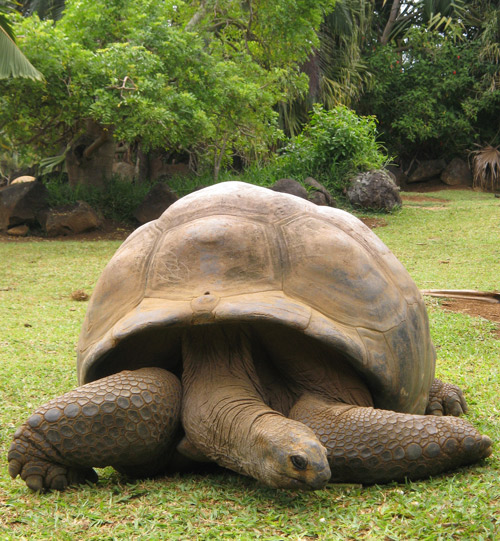 Study suggests rewilding with taxon substitutes works in some situations.

Part of the controversy around rewilding stems from a lack of rigorous scientific studies. Christine Griffiths of Bristol's School of Biological Sciences, based in the west of England, and her colleagues have now presented the first empirical evidence that rewilding can work.

Exotic giant Aldabra tortoises (Geochelone gigantea), were introduced to the Ile aux Aigrettes, a small island lying just off the coast of Mauritius, in 2000. This was with the aim of dispersing the seeds of a slow-growing ebony tree, which once covered the island, but today is critically endangered following intensive logging for firewood that lasted until the early 1980s.

In order to determine the extent that the ebony forest had been decimated, the researchers surveyed and mapped all ebony trees in an island-wide survey in 2007 and located a total of 3,518 adult trees. However, large tracts of the island remained without ebony trees, particularly in the northern and eastern coastal areas nearest to the mainland where logging had been at its most intense.

There had been no regeneration in these areas, even though the forest clearance ceased 30 years ago because, with the extinction of the island's native Cylindraspis giant tortoises around 1800, there were no large fruit-eating animals left to disperse the seeds of these critically-endangered trees.

With the rewilding with taxon substitutes, introduced Aldabra tortoises not only ingested the large fruits and dispersed large numbers of ebony seeds, but the process of passing through a tortoise's gut also improved the germination process, leading to the widespread, successful establishment of new ebony seedlings in the heavily-logged parts of the island.

“Our results demonstrate that the introduction of these effective seed dispersers is aiding the recovery of this critically endangered tree, by spreading its seeds again,” Griffiths said. “Reversible rewilding experiments such as ours are necessary to investigate whether extinct interactions can be restored.”

“Ecological restoration projects generally involve the plant community, as more often the animal components are extinct. There is, however, increasing evidence that restoration ecologists should be most concerned with the decline of species interactions, rather than actual species extinctions,” said Professor Stephen Harris, co-author of the study. “Species interactions structure ecological communities, and provide essential ecosystem processes and functions such as pollination, seed dispersal and browsing, that are necessary for the self-regulation and persistence of a community."