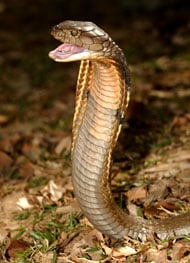 Site Staff October 28, 2013 4:01 pm
How To Get Your Hognose Snake to Start Eating Again
Care And Breeding Tips For The Red-tailed Green Rat Snake
Aggressive Snake Strikes After Feeding

Housing a snake that is quick, intelligent, and deadly, as well as over 12 feet long, can be challenging. When kept, they usually are given their own enclosures, one pair per enclosure. Commonly enclosures are at least 5 feet wide by 10 feet long and tall enough for a person to stand and maneuver during maintenance. At least one lockable hide box or switchbox is essential, but this species often refuses to be goaded into entering a box. Ventilation is a must, as is a large tub of water for humidity and bathing. Keep the temperature in the range of 85 to 95 degrees Fahrenheit, dropping a few degrees at night. Some specimens spray liquid feces over all surfaces daily, so keeping the enclosure clean is difficult and dangerous. Many king cobras refuse to eat in captivity, but those that do will take several large rats or rabbits a week and also any dead snakes that can be found. A large male is recorded eating over 5 pounds of rats and snakes in a single week. King cobras are much too dangerous to be kept by individuals without proper training. They are notorious escape artists, and their bite can kill an adult human in 15 minutes under rare circumstances.

Often a common snake, king cobras are found in many habitats but tend to prefer open woods and pasturelands near water. They may enter villages and gardens in search of snake prey, feeding on other cobras and vipers.

Found widely over warm southern Asia, from Pakistan and India over southern China and much of Southeast Asia, south to the Indonesian islands and the Philippines.