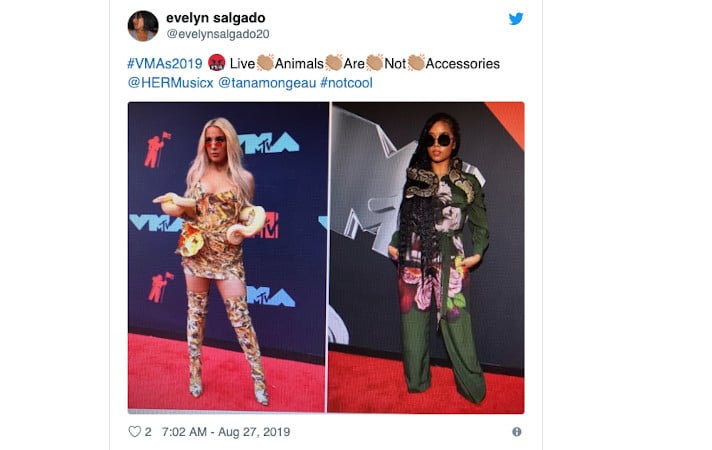 These celebrities donned snakes at the 2019 MTV Video Music Awards but received some backlash.

YouTube video star Tana Mongeau and Grammy award-winning musician H.E.R. walked the red carpet at the 2019 MTV Video Music Awards donning a boa constrictor and a ball python around their bodies, respectively and promptly got some flack from folks who disagreed with them bringing the reptiles to the awards ceremony.

Mongeau told Fox News she is working with an East Coast snake company, and the reptile came from them. "The snake company that I'm working with, all of the proceeds and the money that they earn goes to rescuing a lot of snakes, especially out here on the East Coast," Mongeau said. "It's really cool and I'm super excited to be working with them."

I swear to god y’all need to stop… animals are LIVING CREATURES not handbags or accessories #tanamongeau #MTVVMAs pic.twitter.com/yRUGmHMk7G

Some users of social media were not amused. "Animals aren’t fashion accessories," said one. "I swear to god y’all need to stop… animals are LIVING CREATURES not handbags or accessories," frickyoubro wrote on Twitter.

The video that accompanied the tweet showed Mongeau posing on the carpet and what appeared to be a snake handler very close to her.

H.E.R. donned the awards show with her ball python, and most were not too happy either. Unlike Mongeau, the Grammy award winning artist is a snake keeper. H.E.R. wrote on Instagram that she is a snake lover who keeps five snakes.

VMA’S with a noodle 🐍 i got 5 noodles at home. I try to bring them everywhere I can because people love them and they are really cool. They are used to being around a lot of people. @jayprehistoricpets taught me lol better than being alone. They are great pets ❤️

Jay Brewer is a renowned breeder of reticulated pythons and is based at Prehistoric Pets in Fountain Valley, CA.

Some though we’re still not too happy.

Wrote anusreechakraborty98 “Even if that's your pet and you have 3 back at home but bringing your pet in an environment that too a snake is too much. It's like you're using it as a prop. I love snakes but you need to show off your love for your snakes in a better way.”

This isn’t the first time a celebrity showed up to an awards show with a snake as a prop. Justin Bieber brought a boa constrictor to the 2011 MTV Music Awards, and just a few months after acquiring it, he auctioned it to benefit Pencils of Promise, a nonprofit organization that provides pencils, pens, and other educational supplies to disadvantaged children all over the world. His snake eventually turned up at the Rad Zoo in Owatonna, Minnesota.

So readers, what do you all think? Please leave your constructive comments below.

Thank you @jayprehistoricpets for a crazy day!!!