Has a delivery service ever lost your pet reptile? In the middle of Winter? A woman in Oklahoma City lost hers, but thanks to her vent on Facebook, he

Has a delivery service ever lost your pet reptile? In the middle of Winter? A woman in Oklahoma City lost hers, but thanks to her vent on Facebook, her daughter's snake was found, cold but alive.

Jinks, an Angolan python was supposed to be delivered to Belle Marshall’s home December 13, but it was not. She called FedEx and they told her they don’t know where the snake is. At that point the 40 hour heat pack that was shipped with the snake had probably expired and Marshall became even more worried when FedEx never returned her call. She then went onto Facebook and vented, detailing what she says was the FedEx response to her inquiries about her snake.

According to Marshall, the first plane her daughter’s snake was on broke down and the second one arrived after 5 p.m. that Friday in Oklahoma City. She then said that FedEx told her that the Oklahoma facility where her snake was supposed to be was understaffed and wouldn’t be able to offload the shipping container until Monday even though the package was for overnight delivery. 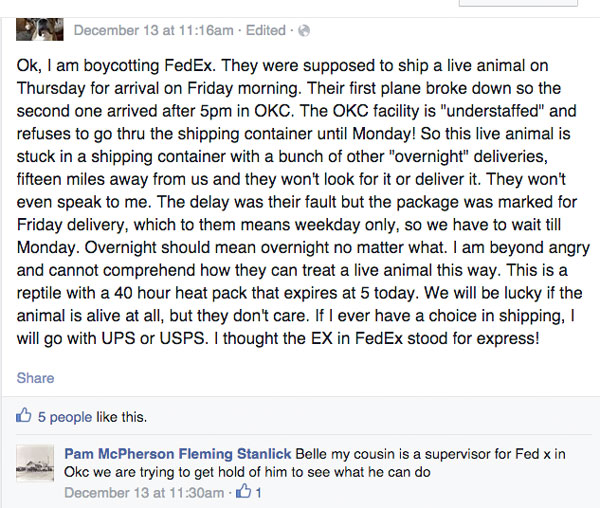 Belle Marshall details her frustration with the apparent lack of cooperation from FedEx.

A friend of Belle has a cousin who is a supervisor at the FedEx facility and contacted him before lunch on December 13 to see if he could help. At 1:47 p.m., Belle announced on her Facebook page that the snake was located and her daughter was driving down to pick her up. 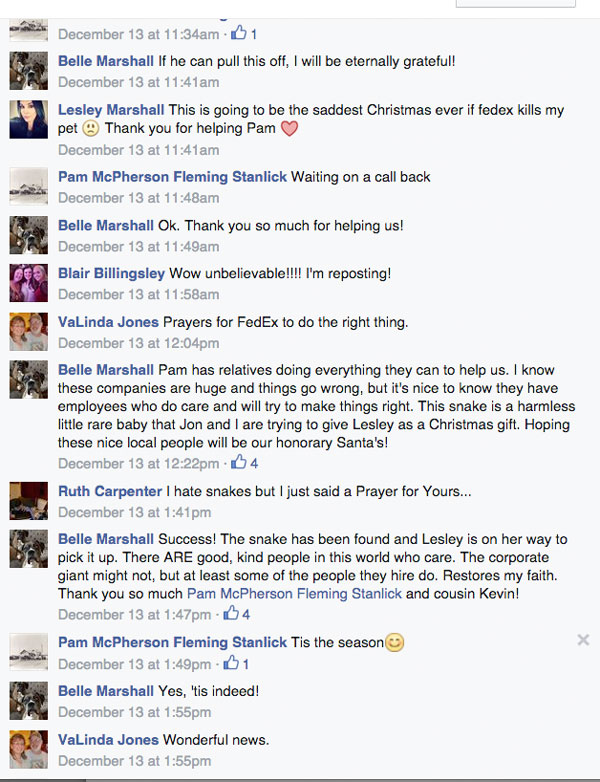 Marshall has success when a high school friend of hers responds that her cousin is a supervisor at FedEx in Oklahoma City.