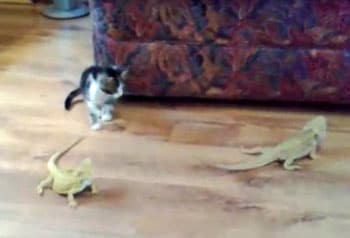 Video: Curious Kitten Freaked Out By A Pair Of Bearded Dragons

Kittens are very inquisitive and often get caught up in mischief. In this video courtesy of MSN, a kitten shares the floor space with a pair of bearded dragons (Pogona vitticeps). The kitten checks out the first dragon, giving it a little nip on its tail while barely acknowledging the second beardie behind it. 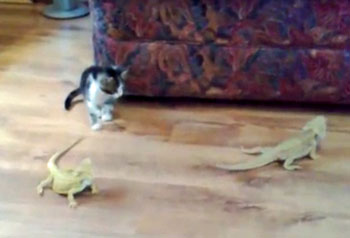 A kitten stalks a bearded dragon and forgets the second one

When the first beardie doesn't want anything to do with being nipped on the tail and walks away, the second beardie starts ambling within view of the kitten, who, with apparent focus on the first lizard, gets scared, flipping and jumping until it gets footing on the slippery floor and runs away.

Bearded dragons are one of the most popular pet lizards. They hail from Australia, home to kangaroos, pythons, crocodiles large sharks, vickies, and other interesting creatures. The bearded dragon  is known for being alert, hardy and tame, and its large size makes them more easily handled than other smaller lizards. They can grow to more than 2 feet in length and can live between 6 to 10 years.