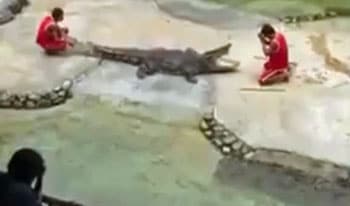 Video: Croc Nearly Makes A Meal Out Of Handler

Samutprakan Crocodile Farm and Zoo is known for its trainers who place their heads in the jaws of crocodiles.

A 27-year-old trainer at the Samutprakan Crocodile Farm and Zoo in Bangkok, Thailand escaped with his life during a stunt gone bad July 21. In front of a live audience, the trainer is shown prodding the crocodile with a stick of some sort on the snout and the jaw. He then kneels down and prays, then sticks his head in the jaw of the crocodile. 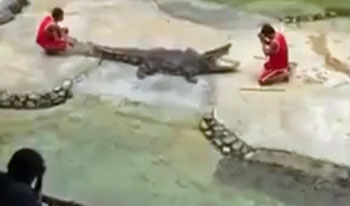 That is when the crocodile clamps down on the head of the trainer and thrashes about for a few seconds before releasing the man. The man exits the stage, while the crocodile, seemingly agitated, retreats to his pool. Luckily, neither the man nor the crocodile were hurt during the incident. The video was captured by a spectator and posted to YouTube July 23. The farm holds circus-like shows with the crocodiles, including wrestling matches and is known for its trainers sticking their heads in the jaws of the crocodiles.

Crocodiles are powerful predators with tremendous biting power. Although it is not known what kind of crocodile bit the trainer, a 17-foot saltwater crocodile (Crocodylus porosus) has a bite force of up to 3,700 pounds with a tooth pressure that is the equivalent of 350,000 pounds per square inch. This is according to Greg Erickson of Florida State University, who has done extensive research on the bite force of crocodilians.

Saltwater crocodiles are the largest of the crocodilian family, measuring up to 23 feet in length. They can be found in Southeast Asia and Australia, where they are known as salties. The Philippines in September 2011 captured a 20-foot saltwater crocodile and put it on display. However, due to a lack of knowledge on how to care for it, and housing it in what amounted to a kiddie pool, Lolong, as it was named, died a year later.