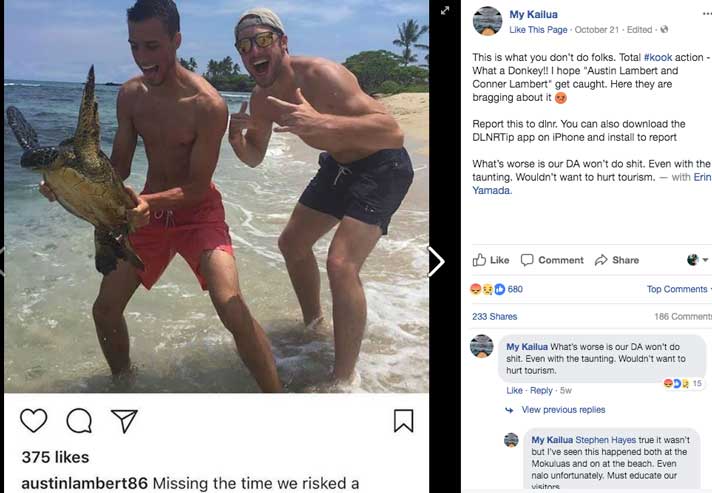 Officials say that the $750 fine each individual incurred is nothing compared to the penalties for a severe violation the Endangered Species Act.

Two California men were fined $750 each for picking up a green sea turtle on a beach in Hawaii, which is a federal offense.

The men identified as Austin Lambert and Conner Lambert on social media, posted a photo of themselves with one holding the green sea turtle (Chelonia mydas), and the other throwing hand gestures at the photographer. The caption to the photo read, “Missing the time we risked a $20,000 fine to catch a sea turtle with our bare hands.”

The Hawaii State Department of Land and Natural Resources was alerted to the photo and officials there were not happy. An investigative case was launched to determine if the state should take legal action against the individuals. It was determined there was enough evidence to do so. The case was transferred to the NOAA Office of Law Enforcement, which was able to identify and track down the tourists. They admitted guilt and paid a $750 fine each.

“It’s the disrespect that really upsets people the most. Here in Hawaii, we really respect our animals and respect our wildlife and when we see somebody blatantly disrespecting them and removing them from their natural habitat, that is what upsets everybody the most and what spurred action in this case,” Irene Kelly, NOAA’s sea turtle recovery coordinator, told KHON2.com.

This is what you don’t do folks. Total #kook action – What a Donkey!! I hope "Austin Lambert and Conner Lambert" get…