Dr. Phillip Arena, a reptile biologist with Murdoch University in western Australia has called for the Cayman Turtle farm to be shut down after viewing video footage of the farm's animals and the conditions in which they apparently live. According to a press release put out by the university, Arena looked at video and still images provided by the World Society for the Protection of Animals (WSPA), which has been campaigning to get the farm shut down. Upon inspection of the video footage and other materials, Arena said that he found evidence of cannibalism among the sea turtles, as well as indications of disease, captivity stress, poor diet, overcrowding, neglect, birth defects, and poor water quality. 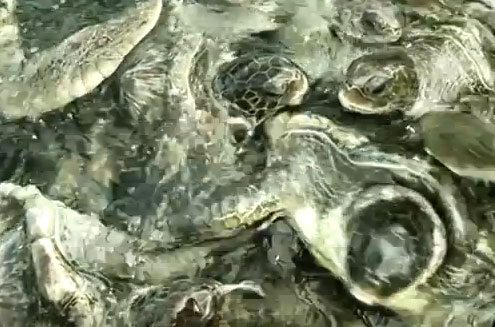 “One of the turtles I assessed, a Kemp's Ridley (Lepidochelys kempii) sea turtle which is the rarest species of turtle in the world, was kept in such poor conditions that it was clearly dying a slow death,” said Dr. Arena. “I found evidence of limb trauma, vitamin deficiency and disease; the tank water was turbid and the turtle’s shell was blanketed in an unnaturally thick layer of algae. “The farm should be closed down because it displays no evidence of good science."

“It’s a sad fact that reptiles are able to withstand such poor conditions. To the inexperienced handler/owner, they often show very few signs of stress and disease until it is too late. Furthermore, a second part of our investigation examined the potential impact on public health due to contact with diseased animals, unclean water and the consumption of poor quality turtle meat.”

In addition to what Arena says is deplorable conditions at the turtle farm, the release of turtles into the wild by the farm is overestimated by the farm and none should be released anyway given the chance that these turtles may infect wild populations with disease that Arena says is prevalent with the turtles at the farm. The World Society for the Protection of Animals have been trying to get the farm to abandon the farming of sea turtles and instead covert the facility into a research and education center that focuses on the conservation of the turtle species that can be found around the Cayman Islands.

According to the Cayman News Service, the Cayman Turtle Farm is still discharging polluted waters into the ocean and is near bankruptcy. The news service cited the farm's 2011 annual report that the service says was audited by KPMG. The news service also said that the farm failed to obtain proper environmental permits for the years 2007-2008. The farm obtained a two-year permit to discharge waste into the ocean but had to reduce the amount of effluent by 50 percent, which the report states was not done. The report also said that the government provided the farm with close to $10 million in 2011 to keep the farm in operation. The news service also said that the farm has denied all accusations made by the WSPA and has commissioned its own report on the farm, but the public has yet to see that report.