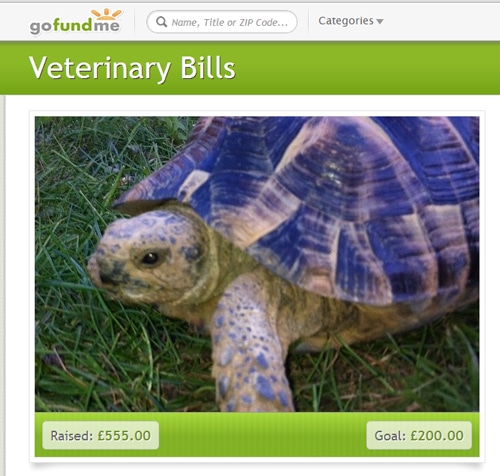 Owner turns to Go Fund Me to raise funds for tortoise's surgery.

Japan Railway Takes Novel Approach To Keep Turtles Off Train Tracks
!0,000 Titicaca Water Frogs Die in Peru And Nobody Knows Why
X-Ray Footage Of A Shovel-Nose Snake Moving Under A Sand Bed

Cedric, a four year old African spur-thighed tortoise (Geochelone sulcata) was in need of surgery to repair a prolapse of the cloaca, so his owner who rescued him from a friend, turned to the crowd funding site Go Fund Me with a plea for help. The surgery costs the equivalent of $270 (150 pounds in England) and the new owner, Miles Jelfs, of Bristol, England, couldn't afford the surgery at the time. 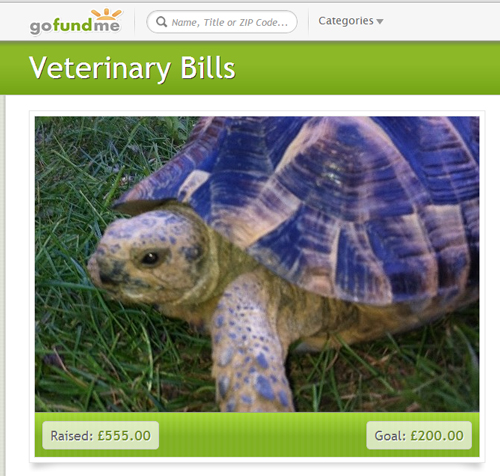 Cedric the tortoise needed surgery and his new owner crowdfunded the vet bill to help defray the costs.

This is when Jelfs turned to the crowd funding site Go Fund Me and set up a request, stating his plea for assistance. Fifty two online tortoise lovers immediately went into action and exceeded Jelfs request of 150 British pounds in 13 days. The remaining monies from the crowd funding request were donated to animal charities. Jelfs is currently fatteneing up Cedric for surgery, which he hopes will take place in the next month.

Here is Jelf's thank you on Go Fund Me:

Thank you so much to everyone who has donated. The level of support from you all is overwhelming and we are very grateful. We should have an exact cost by tomorrow but in the meantime I am confident enough money has now been raised to help Cedric on his way. Any excess proceeds will be donated to animal charities, namely the British Chelonia Group and the PDSA, however please send in any other suggestions on where you would like to see this money go. Many thanks once again. You rule!

This isn't the first time the Internet was used to help an animal with penis surgery. The rock band The Growlers of Costa Mesa, Calif. had a similar siutation with their dog, Woody, a street dog that the band found in a shopping cart in Los Angeles last year. Woody's penis experienced some trauma and was also in need of surgery, to the tune of $3,500. The band made t-shirts to Help Save Woody's Woody, posted Woody's plea on Facebook, and their fans responded.