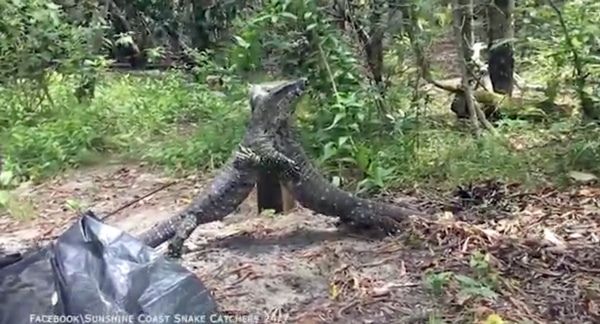 These Lace Monitors Battle For Supremacy

Snake catchers with Australia’s Sunshine Coast Snake Catchers 24/7 were out camping about a month ago on Bribie Island when two large lace monitors decided to have a go at each other, presumably for the right to scavenge the campsite. Snake catcher Richie Gilbert’s brother Steve took the video with his iPhone.

BIG BOYS BATTLE IT OUT!This was awesome. I got front row seats to these big boys battling it out for the right to scavenge at our campsite over on Bribie Island around a month back. I've spent my whole life observing reptiles in the wild and this was the first time and probably the only time I'll ever get to see this epic behavior. All up there was about 6 Lace Monitors cruising around us while this was going on. My brother Steve took this iPhone video and I'm so stoked he did. Enjoy RichieATT: To use this video in a commercial player or in broadcasts, please email licensing@storyful.com

Richie said in his Facebook post that this was the first time he ever witnessed this type of behavior among lace monitors and probably the only time he will see two lace monitors duking it out like Sumo wrestlers.

Richie said that when these two lizards were fighting, around six others were on the periphery of the campsite.