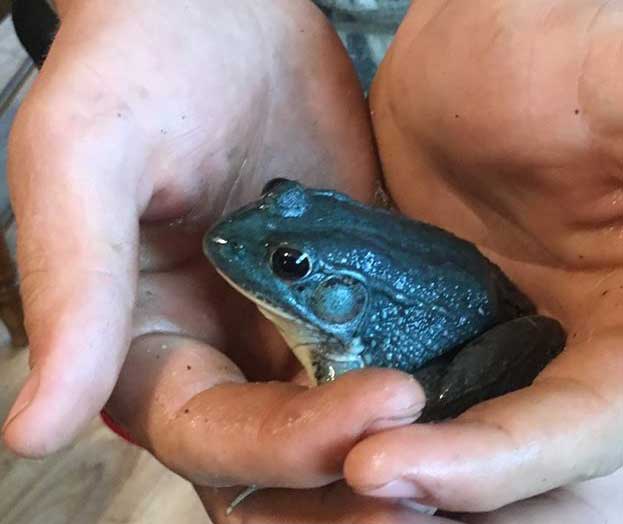 The 14-year-old was looking for a frog to enter in a frog jumping contest.

The blue-colored frog, which is normally green, is a relatively rare occurrence, according to the Maine Department of Inland Fisheries & Wildlife, which posted a photo of the blue amphibian on its Facebook page. The department wrote that this particular frog lacked in yellow pigment which, when combined with blue pigment, gives the green frog its green coloration.

“It’s a relatively rare occurrence, as we generally receive only one report a year of a blue frog. This year, we have had three, including a blue bull frog. We don’t think it is due to the upcoming eclipse, but really have no better explanation as to why this year’s count has tripled. Konor plans to return the frog to its home after the contest.”

The department noted that finding a blue-colored green frog is one of the most uncommon finds in Maine and congratulated Dyer for the find.

The green frog is found throughout the state and is usually a greenish brown coloration with white throats in males and yellow throats in females.  It grows from 5 to 10 cm in length and weighs between 25 and 85 grams. They are often found in freshwater ponds, ditches and other small bodies of water and feed on virtually anything that it can fit in its mouth, including insects, spiders, fish, other frogs, and small snakes.