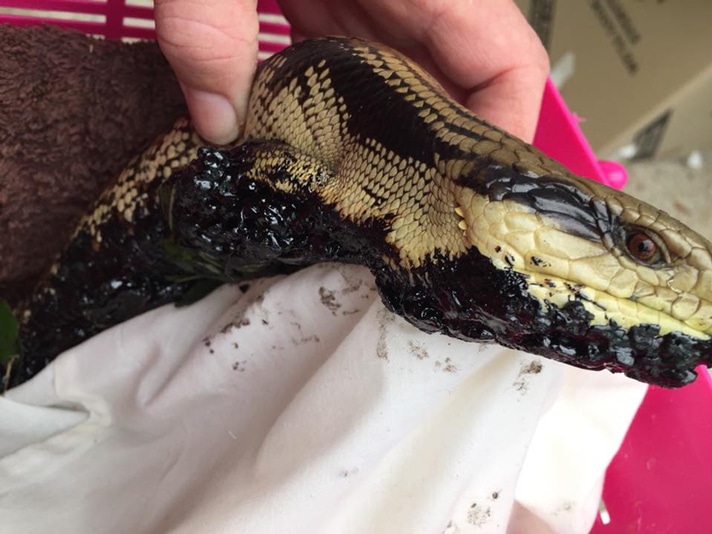 Ray McGibbon used cooking oil and paper towels to safely remove the tar from the lizard.

A blue-tongue skink (Tiliqua sp.) that got itself stuck in some freshly laid tar January 20 in Roberston, New South Wales, Australia, can thank a snake catcher for spending 13 hours removing the sticky stuff from the reptile. 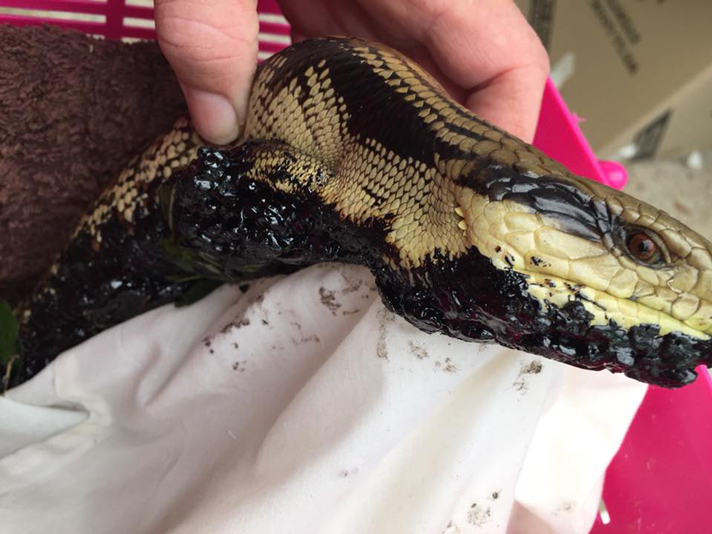 This blue tongue lizard got stuck in some tar. A snake catcher spent 13 hours cleaning the tar off the lizard.

The lizard, native to Australia and popular to have around due to its love for garden snails, was found by residents of the town stuck in the tar.

It was eventually brought to Ray McGibbon, a licensed snake catcher and reptile expert, who spent 13 hours using non-toxic kitchen oil and paper towels to remove the tar off the lizard’s body.

“It was a lot worse than I expected, the tar was about two inches thick and only an experienced rehabilitator could handle the lizard,” McGibbon told The Daily Advertiser.

McGibbon worked on the lizard for about 4 1/2 hours when he first took possession of it and then gave the lizard a rest.

“I started off using kitchen oil, slowly rubbing and dabbing to get the tar off,” he said. “We stopped at about 2.30 a.m. on Sunday to give the lizard a bit of a rest.”

McGibbon started cleaning the lizard again around 10:30 a.m. Sunday morning and finished cleaning all the tar off the reptile at around 3:30 p.m.

“We finally got him all tar free by the afternoon but he was a bit burnt and there was some scale damage,” McGibbon told The Daily Advertiser.

“We’ve been applying some creams and ointments to him but he won’t go back into the wild until he sheds his skin so we can see the extent of the damage,” he said.

McGibbon said that it wasn’t uncommon for reptiles to get stuck in tar during the summers in Australia, but he noted that it is important to know that these cold-blooded creatures are an important part of the Australian ecosystem.

“We’ve got to look after reptiles as well, and that’s what I’m all about,” he said.