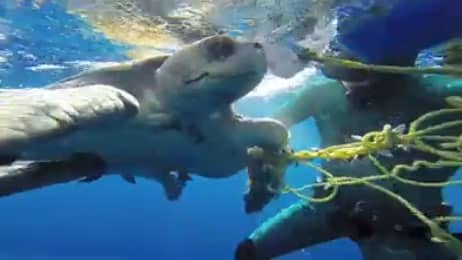 After becoming free, the sea turtle turned back to its rescuer.

Surfers Colin Sutton and Cameron Dietrich, team riders for the Toes On the Nose clothing company were free diving somewhere in the Pacific Ocean when they happened upon a green sea turtle (Chelonia mydas) entangled in some rope. Dietrich worked to free the turtle while Sutton captured the entire event on video.

What is particulary cool about this event is after Dietrich removed all the rope from the turtle and let the turtle free, the turtle swam back to Dietrich and hung out right in front of his face for a while before taking off. 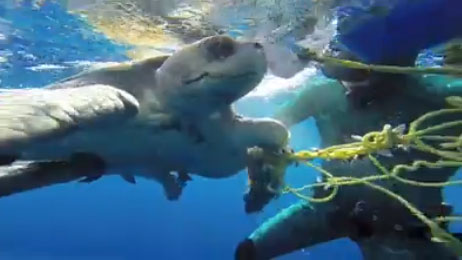 Surfer Cameron Dietrich cuts the rope in which a sea turtle was entangled.

Sea turtles often become entangled in debris that floats on the surface throughout the world's oceans. All sea turtles are endangered in the United States, and if a sea turtle is spotted entangled in debris or in distress, people are told not to interfere in anyway but to call the NOAA Fisheries' Sea Turtle Disentanglement Network at (866) 755-6622 , which is comprised of 16 organizations that have the expertise to respond to stranded and entangled sea turtles. In U.S. waters, interfering with a sea turtle in any way, even in order to save it, is a violation of U.S. law, unless you are an expert in freeing these often very large reptiles.