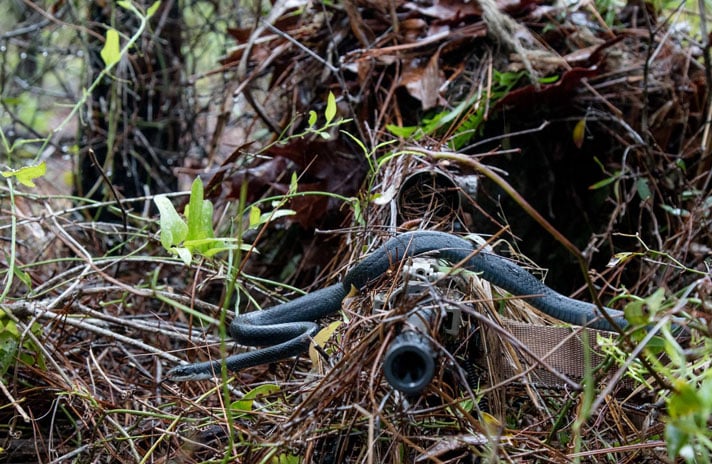 The snake crawled across the barrel of Pfc. William Snyder's sniper rifle.

A U.S. Army National Guard sniper was interrupted during a training exercise by a southern black racer snake  (Coluber constrictor priapus) who decided to slither over the barrel of the guard’s gun.

Pfc. William Snyder of the  1-173 Infantry was practicing woodland stalking while wearing a camouflaged ghillie suit when he was interrupted by the reptile. Snyder was in full camouflage, and if it weren’t for the barrel of his sniper rifle protruding from the pine needs and leaf litter that covered him, you probably wouldn’t have seen him. The snake obviously didn’t as it crawled right over the rifle barrel and went on its way.

“Our snipers are trained to remain perfectly still for hours on end when in position and remain invisible to enemies and even wildlife,” the Alabama National Guard wrote on its Facebook page April 12, detailing Snyder’s encounter, or, rather, non-encounter with the reptile.

Followers of the Alabama National Guard’s Facebook page had fun with Snyder’s encounter, with some saying that they would’ve jumped up and said “I’m out,” while others educated those with a fear of snakes how black racers are totally harmless to humans. But the best comment has got to be the one below.

Southern black racers are common throughout much of the southeastern United States. A colubrid, the southern black racer feeds on variety of animals, including rodents, frogs, lizards, birds, and even other snakes. Some folks mistake this totally harmless reptile with cottonmouth snakes due to its white chin. Predators of black racers include red-shouldered and broad-winged hawks.