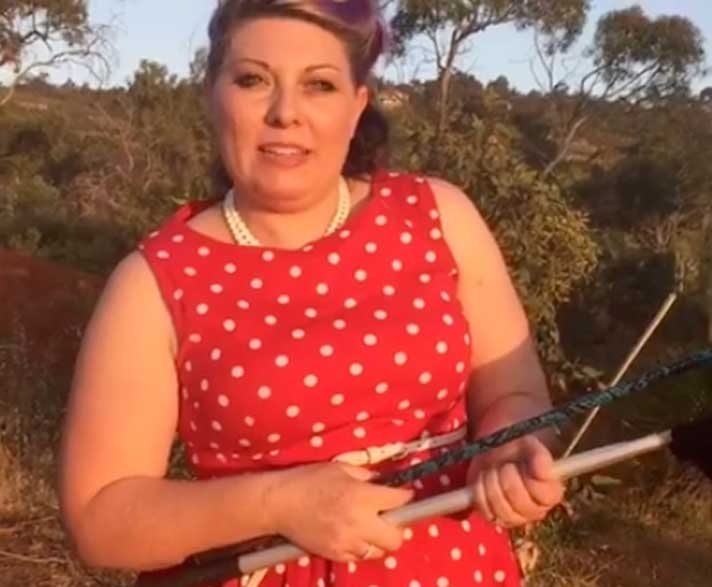 Lisa Harrap was at a Melbourne Cup party, where she had just won an award when she got the call to remove a snake.

Loggerhead Turtle Treated For Red Tide Poisoning Released
More Than 100 Seized Endangered Tortoises Returned to Madagascar
Snake Eggs Or Lizard Eggs? That Is The Debate Going On In Australia And Online

Lisa Harrap, an Australian snake catcher with Perth Hills Reptile Removal, had just won a best dressed award at a Melbourne Cup luncheon and was relaxing at a hotel when she got a call. A venomous dugite (Pseudonaja affinis) was in someone’s yard and the homeowner wanted it out.

Following on from yesterday’s Melbourne Cup video of Lisa catching a dugite… here is the video of her releasing the snake in the beautiful Perth Hills.

Duty called, and Harrap, dolled up in a red and white polka dot dress and patent red leather pumps, got in her car and drove to the home where the snake was seeking refuge under a shaded patio, away from the brutal Australian sun.

"It was quite a hot day, and snakes don't tend to come out when it's super hot," Harrap  told West Australia Today. "But when I got to the property I saw it had a pool, so it's likely it had just come out for a drink and was cooling off undercover."

She did it again!! For the second year in a row, Lisa caught a dugite while in her Melbourne Cup attire! No yellow gum boots this time, just a 50’s dress and high heels. She coincidentally won ‘best dressed’ at the Melbourne Cup Party she attended. Have you ever seen a more fashionable snake catcher?! 😉 She went slightly viral last year, let’s see if she can do it again hehe — A

The homeowner who called was slightly taken aback by Harrap’s choice of dress, but she was at a Melbourne Cup party, and well, she didn’t want to waste time and potentially lose the chance to capture the reptile.

"I did bring my gumboots with me but when I found it, I could see it was relatively easy to get to," she said. "Plus I'm pretty confident in my heels."

Harrap made quick work in capturing the snake and released the venomous reptile at a local park. She has got to be the most stylish snake catcher in all of Australia, at least she was on the day of the Melbourne Cup.

Loading...
Newer Post
Man In Germany Locked Up To Sober Up After Police Find A Snake In His Pants
Older Post
Aussie Snake Catcher Captures Crazy Footage Of Carpet Python Trying To Eat A Bat
Advertisement