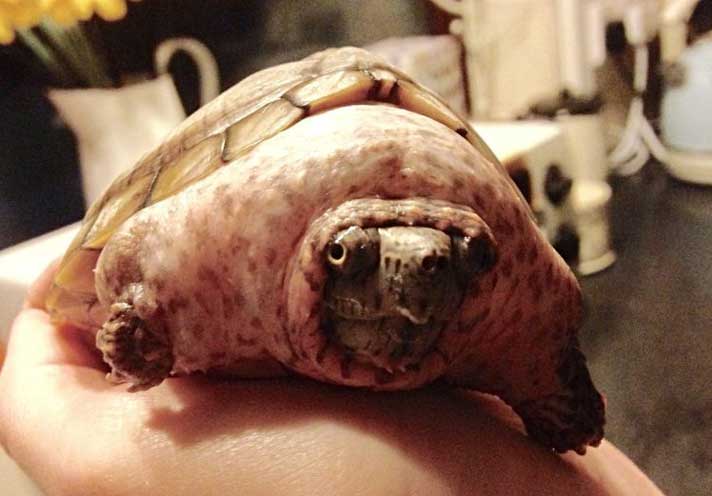 The RSPCA is looking for any information on the person who abandoned the sick reptile.

Someone who improperly cared for a musk turtle (Sternotherus sp.) abandoned the reptile at Hartshill Park in the United Kingdom, and the RSPCA is looking for anyone who may have information on who abandoned the turtle.

The turtle was examined by an exotics veterinarian and was determined to be suffering from lymphoedema, which is thought to be due to being fed a poor diet. It is now being cared for by the vet and is responding to treatment.

This poor musk turtle was found abandoned and suffering from a serverely swollen body. It's thought his condition was…

“The poor turtle was found in a tank, and it’s clear that whoever left them there did so with the intention of abandoning them,” RSPCA Inspector Charlotte Melvin said in a statement on the RSPCA website.

“The turtle looks in a terrible state as a result of their body becoming swollen. It’s likely that they’ve been suffering for some time as their owner failed to seek veterinary treatment for their condition.”

“The turtle looks in a terrible state as a result of their body becoming swollen. It’s likely that they’ve been suffering for some time as their owner failed to seek veterinary treatment for their condition.”

Nicola White, the RSCPA’s exotics senior scientific officer said not to be fooled by their tough appearance as reptiles require specialized care.

“It can be tricky for a beginner owner to know exactly what to feed their reptile and to tell when their reptile is unwell, so we’d always recommend that owners ask for help and advice from experienced keepers, and take their reptile to an exotics vet at the first signs of illness,” White said.

“This is another example of why we’re extremely concerned about the number of abandoned reptiles the RSPCA are being called about. Last year we rescued 1,700 reptiles, many as a result of being abandoned.”

If you are going to acquire a reptile, before you do so, make sure that you read up on their care requirements before you make the commitment.

Loading...
Newer Post
Snake Lost During Move To New Apartment Found A Few Doors Down
Older Post
Back to Nature: Is It Wrong To Keep Wild Snakes
Advertisement