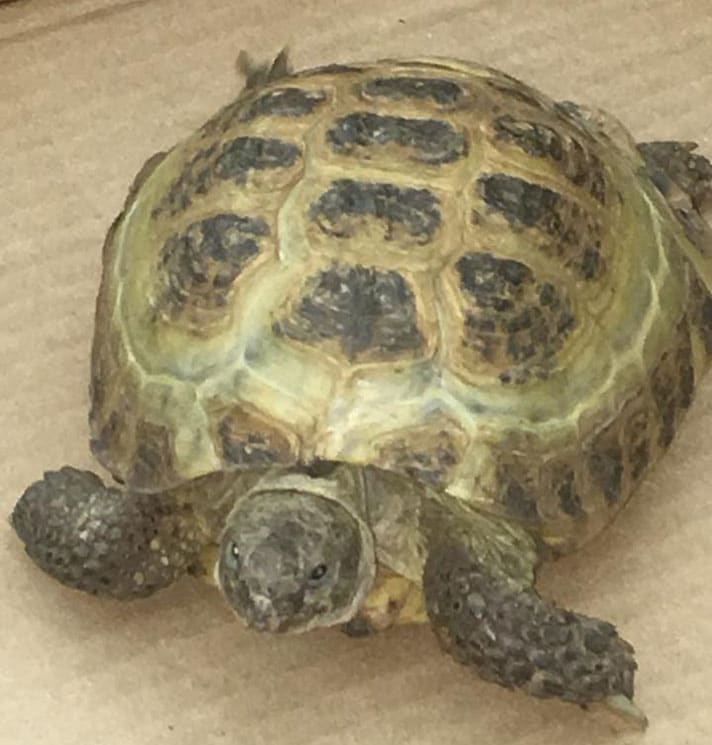 Jill wandered away from a backyard party in October 2017.

A Russian tortoise in Minnesota who wandered away from home last October was returned to her owner after Eagen Police retrieved the tortoise after a resident called to report it.

This Russian Tortoise was located by a citizen in the 1800 block of Bear Path Trail. The tortoise is not native to…

Posted by Eagan Police Department on Tuesday, May 29, 2018

Eagen Police posted a photo of the tortoise, with its head sticking outside a hole in a cardboard box, on social media, saying:

“If you lost your Russian Tortoise near Bear Path Trail he's hanging out with the cops. He's content munching on lettuce and carrots but ready to go home. Give us a call if he's yours.”

That same day, Mike Wallace of Mendota Heights called the police and told them the reptile might be Jill, Wallace's Russian tortoise who got lost last year. Wallace told police that Jill was in his backyard during a party and she apparently wandered away. Wallace put up posters all over the neighborhood but was unsuccessful in locating the chelonian. How she survived the Minnesota winter is anyone’s guess.

If you lost your Russian Tortoise near Bear Path Trail he's hanging out with the cops. He's content munching on lettuce and carrots but ready to go home. Give us a call if he's yours. pic.twitter.com/RKe3v0HjJV

"We had some people that were very knowledgeable about tortoises call up and say it's extremely unlikely that the tortoise could survive the winter but it was possible," Eagan Police spokesman Aaron Machtemes told Kare11.com. "So it's very amazing that the tortoise was able to not only make it miles from home but survive the harsh Minnesota winter."

"They do dig and burrow in for hibernating over the winter months in their natural habitat," Wallace said. "It was great. I definitely see that the tortoise had grown, put on a little weight. She survived the winter fairly well."

The tortoise is headed home. This speedy tortoise left her yard last October and traveled miles. "Jane" is headed back to Mendota Heights to be with her other tortoise family, "Jack and "Jill". Thank you to all who helped share her info. pic.twitter.com/uSKxkVAr1f

Wallace was certain that Jill was his because three of her feet only had four toes. Hopefully Jill won’t wander away anymore now that she is home.

Russian tortoises grow to about 8 to 10 inches and can live for more than 40 years. They are widely captive bred and due to their size, are ideal for those with limited space to keep them.