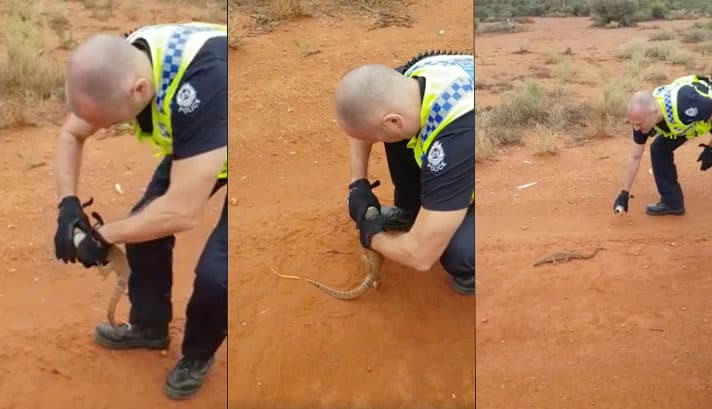 Baron’s Racer Missing From New Exhibit at San Francisco Zoo
50 Duvaucel’s Geckos Released On Island They Once Roamed
Unique Feeding Behavior For A Snake; Tearing Its Food Apart Before Eating It

A police officer in Western Australia went above and beyond the call of duty to save a monitor lizard that got itself stuck in a Red Bull soda can. The unnamed officer, with the Goldfields-Esperance District – WA Police Force was captured on video doing his best to extricate the lizard’s head from the can. 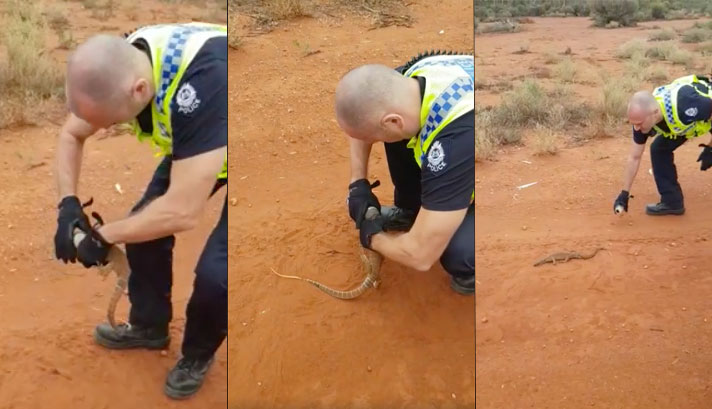 At first, he picks the lizard up and starts working on the can, and seemingly realizes that removing the can is a bit more involved, he squats down with the lizard just above the ground as he wrestles with the can in one hand and holding the body of the monitor lizard in the other.

One of Kalgoorlie's hard working officers saving the life of a local lizard at the Arboretum over the weekend. (PD15602)

After about a minute-and-a-half working the can, he is successful. He then placed the lizard on the ground. The lizard lay motionless, seemingly stunned with its encounter with the can, and then the officer. The officer then gave the lizard a nudge and it moved. Then the video ends.

Folks who watched the video on the  Goldfields-Esperance District – WA Police Force Facebook page were thankful in their own Aussie ways.

Others, however were upset that people litter.

Well done officer. Thank you for saving the little lizard.