One Small Step For Man, One Giant Leap For Frogkind

A remote camera captured an image of a frog (or toad) hurling into the air after a NASA rocket launch last week at the Wallops Flight Facility in Virginia. The unmanned LADEE rocket was headed to the moon when the incident occurred. NASA has confirmed that one of three still cameras setup to capture the launch caught the image of the frog in a single still frame. The photo of the hapless flying frog was posted on NASA's Instagram social media account. 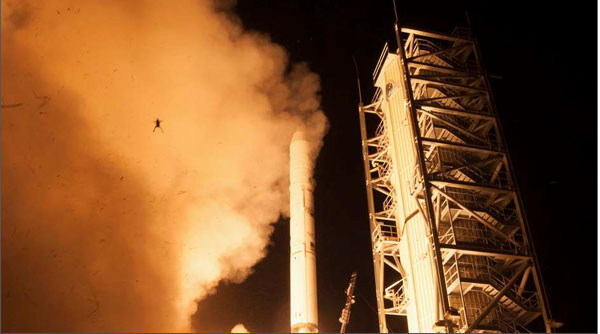 "We got back to the office after the launch at 12:30 a.m. and we're all pretty amused and amazed," Chris Perry told ABCNews.com. "It was also sad to see a frog go like that. As much fire as that rocket is putting out, I have to imagine it got injured." Perry who set up the cameras to document the launch said the power of the rocket's engine knocked his tripod 150 feet away from where he set it up. Perry said the camera was shooting six frames per second and only one photo showed the frog.

According to NASA, the space agency does everything that it can to protect the wildlife that surrounds the facility and noted that hundreds if not thousands of frogs live in the marshlands that surround the launch pad.