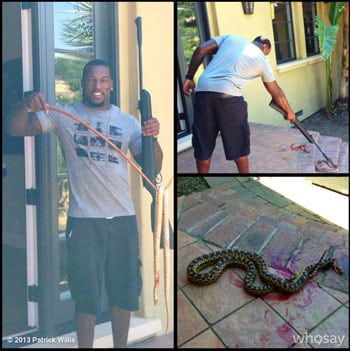 Willis killed what appears to be a gopher snake that was in his house.

Professional football player Patrick Willis' shooting and killing of a gopher snake on his property has caused an uproar of sorts in the media and on his Facebook wall, where pictures were posted of the dead snake and the air gun he used to kill it. Willis, who plays for the San Francisco 49ers said on his wall, "Never a dull moment. I had an intruder in my house welcome to the hills……. Got em." His supporters and detractors then go into a good old fashion flame war over Willis' actions.

As of this writing, the photo received 2,839 comments, and 8,348 likes. Many congratulated Willis for killing the snake and many derided him for his actions.

Willis told ESPN.com that he grew up in the country and had snakes around all the time. "Snakes are bad. And this one was in my house," Willis told ESPN. He said that he had no idea how long the snake was in his house but it freaked him and his family out. "I said, 'This thing is going to die.' The last thing I want was to let it free and then it comes back inside my house and scares my family," according to the ESPN report.

Below are some unedited comments from Mr. Willis' Facebook page regarding him killing the snake.

How is a gopher snake a pest? They prevent mice and rat pests. And yes its sad that many ignorant people liked the image and are like "YEAH KILL ALL SNAKES", thats why we try to educate. I am totally not a tree hugger but all im saying is, that the snake poses no threat for anyone, and if he doesnt have the knowledge to see that he should have called somebody who does. And if he just killed for the fun of it, and for posing like a moron… well screw him….

A chihuahua puppy is more capable of seriously injuring a person than that gopher snake was (really, i'm not exaggerating here). I wonder how badass he would look if he shot a chihuahua puppy because it might bite someone and then held it out on a stick because he's afraid to touch it even after it's dead? That's basically what this looks like to us reptile people when people post pictures of harmless snakes they've killed while trying to look all macho… Like complete wimps who are ignorant and afraid of something for no reason…

I really want the video of him screaming like a girl, jumping on a chair, pulling his hair out, telling his man servant to get the snake… must have happened, I mean to use a rifle (ok ok, a BB gun… so gangsta) on a snake is over the top, especially seeing as it was OUTSIDE at the time of the shooting, and it apparently took more than one shot… That must have been one hell of a reaction.

People kill snakes every day, quit your damn crying you damn cry baby's. it's not like he pulled a mike Vick. Go Niners!!!!!

A SNAKE IS NOT A FRIENDLY CREATURE! SO WHATS WRONG WITH GETTING HIM B4 HE GETS U

The only good snake is a dead snake. I shoot first and check venom later too.


Patrick took care of the snake before it became a problem and where there's one snake you can be pretty sure it's mate will be close. Patrick is a friend and we love and respect him so all the name calling is uncalled for so I will repeat what I said earlier if you don't like what he posts don't read it. Just to let you all know He will have his super bowl ring picture posted before long!! Go Niners!!! 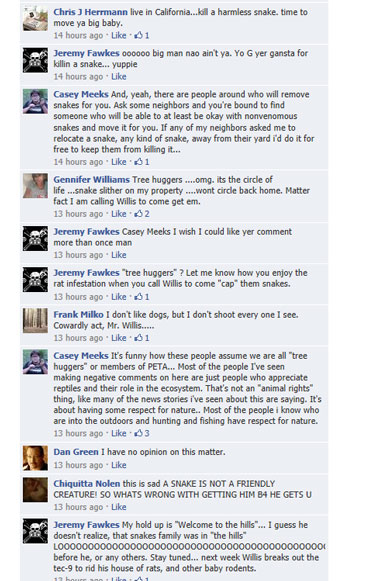 Judging from some of the comments, as with the woman in Utah who has campaigned against a man and his private collection of boa constrictors, there remains a heck of a lot of ignorance when it comes to snakes. Willis killed a snake that was in his house. He had every right to do so. But was it the right thing to do? Can Willis learn that snakes are not bad, but are very beneficial to the environment in helping to control true pest populations?