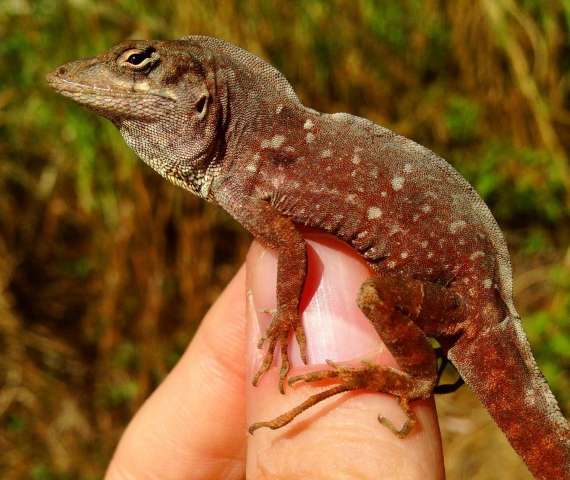 The brown anole is mainly terrestrial, but it frequently climbs trees and vegetation. The brown anole’s cage should feature at least one higher promontory point from which the brown anole can survey the cage floor and also bask close to a heat lamp. Brown anoles are active by day and will pass the night clinging to a leaf or stem. Small moving insects are essential as the brown anoles’ main prey. Brown anoles pounce on any small bug they see moving. Insects should be offered a few at a time until the brown anole no longer shows interest in eating, so as not to allow too many surplus insects to accumulate in the cage. A small water bowl tucked in one corner is fine, but a daily spritz of fresh water from a squirt bottle will send the brown anoles licking the droplets wherever they cling. Eggs are laid two at a time, sometimes several times per year. They are often buried in moist soil around potted plants, which in Florida, accounts for the reason they have expanded their range so rapidly.

Bahamas, and introduced to peninsular Florida and scattered urban area in the southern United States.