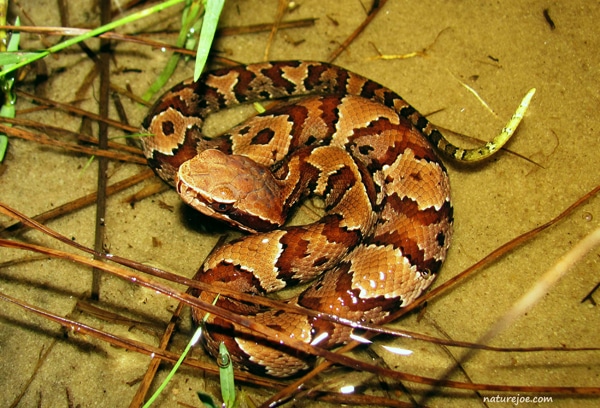 Herping In The Rain

The rain. It can ruin a day for many, and drive people indoors to their favorite DVDs. However in the natural realm it is the giver of life, and

The rain. It can ruin a day for many, and drive people indoors to their favorite DVDs. However in the natural realm it is the giver of life, and it brings things out of hiding – often in great numbers! Some of my greatest herping adventures have occurred on rainy nights. Let's take a look at rain itself. Some nights are not meant for man or beast out there, while other nights will literally have the place crawling with life on all sides, and here we'll take a little look at the best nights, as well as the worst. First off there are two major factors that can affect herping; the temperature and the wind. 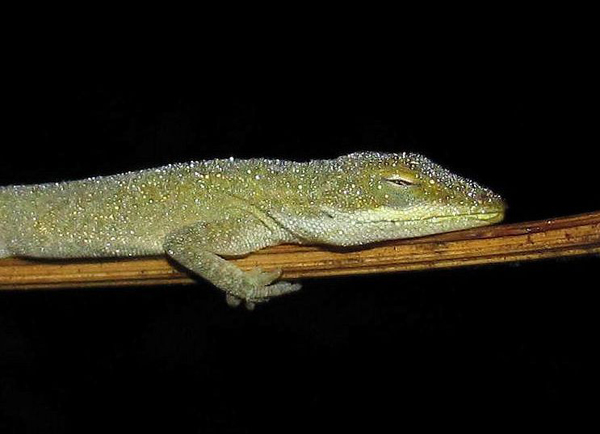 One of my favorites are the sleeping anoles covered in raindrops.

First let's take a look at the PERFECT night. The night that nocturnal dreams are made of are usually very still and warm. "Warm" is a relative term however, since in New York or Indiana for example, a 60-degree rainy night in early-April will send the spotted salamanders (Ambystoma maculata) and spring peepers (Hyla crucifer) wandering in great numbers, while if the same conditions hit Florida or Louisiana in the summertime there would hardly be a creature stirring, so "warm" has different meanings in different areas, and at different times. 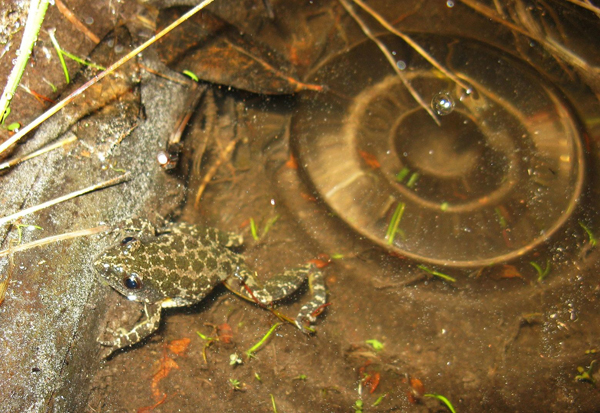 This chorus frog (Pseudacris nigrita) was photographed just as a raindrop fell, adding a neat "special effect" to the photo.

Looking at the Northern part of the country for a moment, many of the rains occur ahead of a cold front, and it can be quite balmy ahead of it. If this balmy period comes after nightfall, things will emerge in vast numbers and activity will remain high until the front passes bringing its dry, chilly winds.

Also one more note concerning northern salamanders. Spotted salamanders migrate to their breeding pools in the springtime under favorable rainfall, and by the time they arrive the tiger salamanders (Ambystoma tigrinum) are already there, since they normally migrate in October and spend the winter on location. If it was a dry autumn, the tigers will migrate in the spring as well. Even during non-breeding times a sudden heavy night rain will trigger a rush of activity, and before I venture forth I always give it enough time for the rain to soak the ground beneath the trees, and this takes about an hour. If the rain stops within that time it will still drip from the trees for awhile but it will not soak too deeply, but it will still be enough to bring out the snakes, toads, and treefrogs.  If the price of gas isn't a big concern for you, road-hunting is the best way to see herps during non-breeding events such as this. A deep, soaking rain will bring up a whole lot more, and a mile of good road (through swampy or wooded areas) will reveal at least a few (to dozens!) of herps per mile. Drive slowly and carefully along these lonesome country roads and you'll see plenty, and be sure to bring your camera and umbrella, as you may stumble into some amazing finds! Whenever I see herps on roads where there are no other cars I simply leave them be, and if the road is a bit more traveled I will move them to the side of the road in which they were traveling. This will avoid having them cross the road a second time! 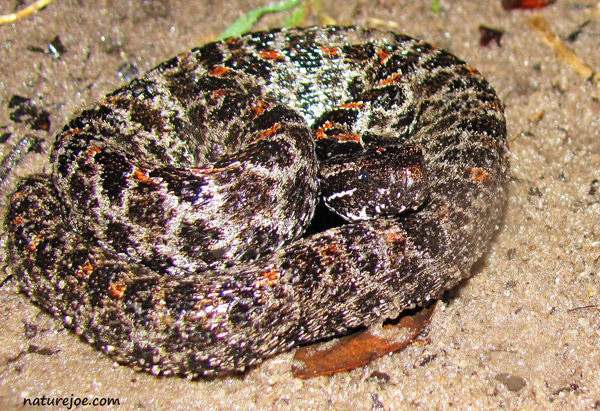 This dusky pygmy rattlesnake (Sistrurus miliarius barbouri) was seen during a heavy downpour along a sand trail in northeast Florida.

Here in Florida things are a bit different. Roads lacking traffic are few and far between, and the rest is pretty much "jungle," and road-hunting is difficult at best, so this is where the fun begins. This means actually stepping out of the vehicle and venturing into the elements. There are plenty of places to do so in most areas of the state. A few hazards one must be aware of when doing this include getting stuck in water-filled ruts, vandalism to your vehicle, mosquitoes, and meeting a drunk with a loaded handgun, but setting this aside the herping can be great!

First here's a look at the best weather conditions for the best results. Anything from mid-60's to steamy-hot are prime conditions down here, and here a good flashlight will be needed. My personal favorite is the Fat Max rechargeable flashlight by Stanley, and it can be switched between "Light" and "Dim", and to me the dim setting is more than bright enough. The battery lasts for hours when used this way, but when the bright beam is used it'll kill the battery in about an hour. Also this kind of herping requires a calm night, otherwise the wind will soak you (and your camera), and may keep many of the herps hiding from the wind by remaining in the thick vegetation. Florida weather can change suddenly, and it helps to have a nice radar app. on your phone as well. I carry my iPhone in a zip-lock plastic sandwich bag, and I can use it freely through the plastic, and I carry my wallet in another bag to protect it too. 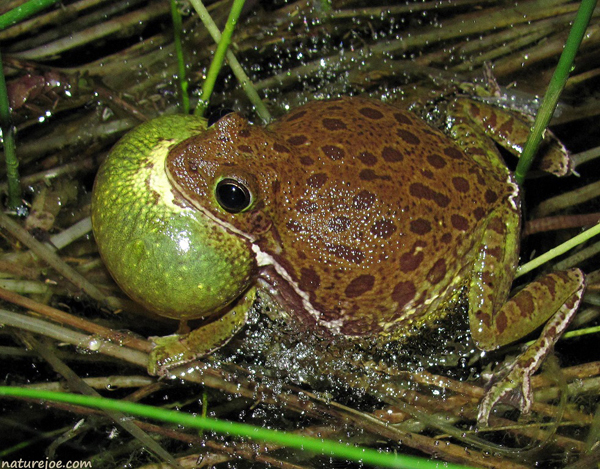 Rain triggers many species of frogs and toads to breed, such as this Barking Treefrog (Hyla gratiosa).

When you walk along the sandy trails you will encounter a variety of interesting things – everything from Armadillos to Black Bears, and of course some nice herps. One of my favorites are the sleeping anoles covered in raindrops, and also keep a lookout in the trailside vegetation for treefrogs, and even the occasional snake. Green Snakes (Opheodrys sp.) seem to favor such nights as they prowl for those little green katydids, and a favorite for many species seems to be the Sabal Palmetto, which is also the State Tree of Florida. There are also Saw Palmettos (Seranoa repens) which seem less favorable to herps than the Sabal, and if you happen to be near gopher tortoise burrows, you may spot the elusive Aesop's frog (Rana aesopus) within several feet of the burrow. When among the Sabal Palmettos, these grow quite tall, but the best ones for herping are the shorter ones that have not developed a trunk yet. Look directly into the giant fan-like leaves, and you'll see a nice variety of treefrogs. Also things will wander great distances from water on wet nights, and even turtles and alligators can be seen on such nights, especially nesting females.

On of my favorite places to herp on rainy nights are the golf courses. The more ponds the merrier, and each pond has its quota of critters. Under ideal conditions an amazing variety of animal life will take to the course, and with the very short grass it's no problem walking from herp to herp and getting some nice pictures as you go. This is perhaps the easiest herping I have ever done, and it's easy to see hundreds of herps in one night under optimum conditions! 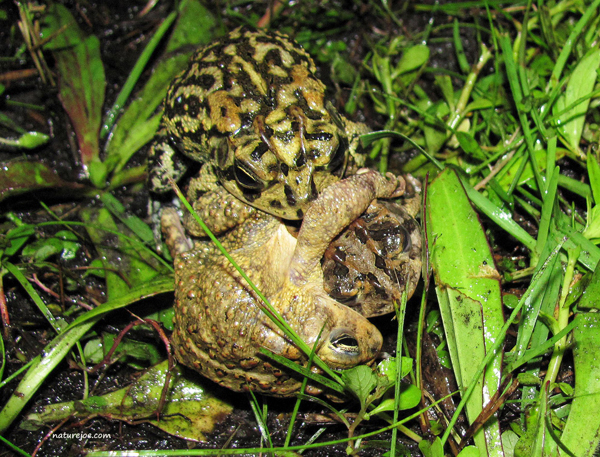 These male toads (Bufo terrestris) were both competing for the same female in this photo.

Frogs and toads can be seen in nearly all areas on the course. Stay near the edge of the woods for snakes usually, and turtles will also use the golf course as a place to nest. I remember one night in Pennsylvania I saw wood (Clemmys insculpta), spotted (C. guttata), and Eastern box (Terrapene c. carolina) turtles all nesting at a surprising distance away from any woods, water, or treeline, and hopefully a safe distance from predators as well. With the rocky soil of that region the eggs should be safe from the weight of the mowers and golf carts. Back in Florida there was an abandoned section of golf course that was a bit overgrown, and one of the sand traps made a prime nesting site for Florida softshell turtles (Trionyx ferox). Also on rainy nights the alligators will often wander across the course from pond to pond. 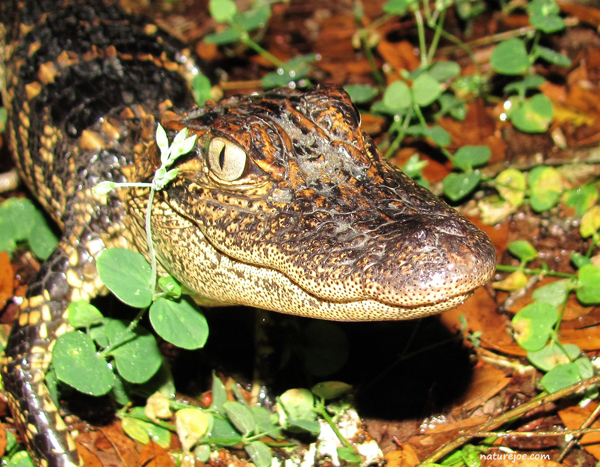 Many herps wander freely under the cover of heavy rain, such as this alligator.

Rainy nights are indeed the very best times to go herping if you don't mind the wetness. You will be amazed at what you will see out there, and as for me I eagerly await the rains, since every one of them seems to bring forth a whole new adventure. 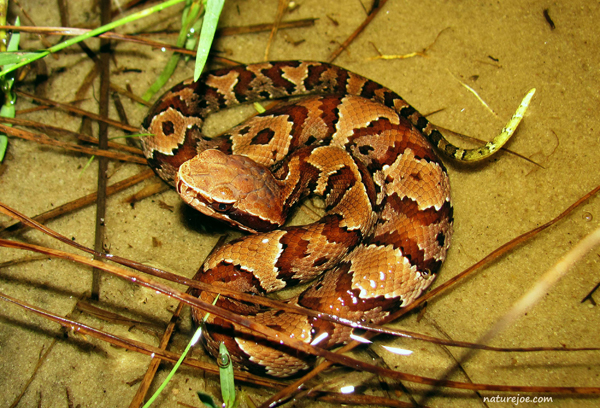 This juvenile Cottonmouth (Agkistrodon piscivorus) was seen in a shallow rain-filled puddle.

"Nature" Joe (Myers) is a nature photographer and has many years of experience with the outdoors and field herping. He has been working with groups of people of all ages in an outdoor educational setting since 1986 and can be followed on Facebook https://www.facebook.com/n.joe.myers  where his nature photography and time-lapse videos are displayed there publicly.