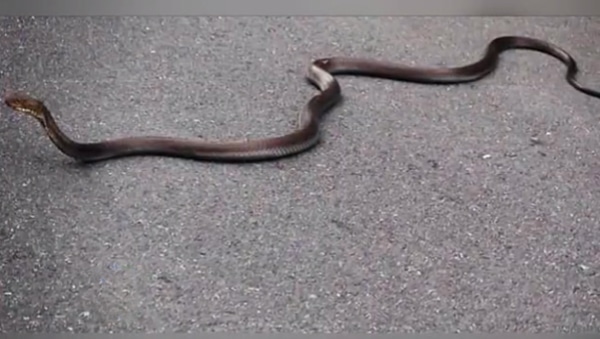 Hawaii has no native snakes but has had its share of illegal pets the last few years.

The Hawaii State Department of Agriculture is investigating a report of a large snake that was apparently photographed on Nu’uanu Pali Drive on the island of O’ahu. There are no native snakes in Hawaii. The snake, which looks like a king cobra (Ophiophagus hannah), was supposedly photographed by a resident near the area on part of the drive that is known as Morgan’s Corner. Consensus on the Snake Identification page on Facebook suggests that the photo is of a king cobra. 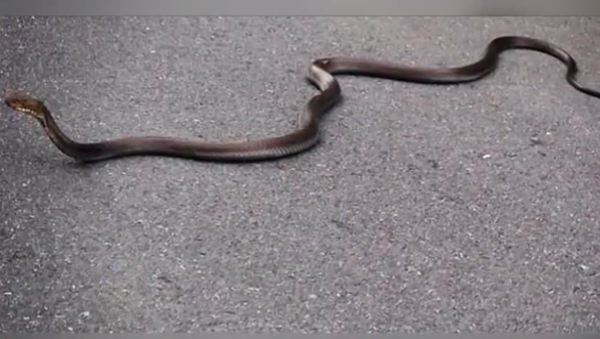 This photograph was supposedly taken on the island of O'ahu in Hawaii.

The possession and transportation of snakes is illegal in Hawaii and is a class c felony, but that hasn't stopped some folks from bringing them in as pets. The state has an amnesty program that enables anyone in possession of snakes, large lizards and other species that are illegal to own in the state, to turn them in to any Hawaiian Department of Agriculture (HDOA) office, the Honolulu Zoo, Panaewa Zoo in Hilo on the Big Island, or any Humane Society. Those convicted of possessing or transporting illegal animals are subject to a $200,000 fine and up to three years in prison. Since the year 2000, the Hawaii State Department of Agriculture has confiscated about 100 snakes.

In 2011, a nine-foot boa constrictor (Boa constrictor) was captured by pig hunters in O’ahu’s Halawa Valley, and in 2013, a five-foot boa constrictor was ran over on the Pali Highway, which replaced Nu’uanu Pali Drive as the main street going into Waimanalo and Kailua. In September 2015, a woman in Pearl City, also on O’ahu, called the police to report a snake in her garage. That snake turned out to be a ball python (Python regius).

It seems unlikely that someone would smuggle a king cobra into Hawaii, but the snake itself could find its way into one of those shipping containers that arrive daily from Asia into the islands. It could have stowed away in a basket or some food shipment from Asia and found its way to Chinatown, which is right down the Pali Highway in town. Or it could have hitched a ride on a U.S. military cargo plane. They have captured snakes on those planes in Hawaii before. A king cobra probably wouldn't survive long in Hawaii as there are no snakes for it to feed on, plus the state is full of introduced mongooses, which would probably eat a cobra if it found it.