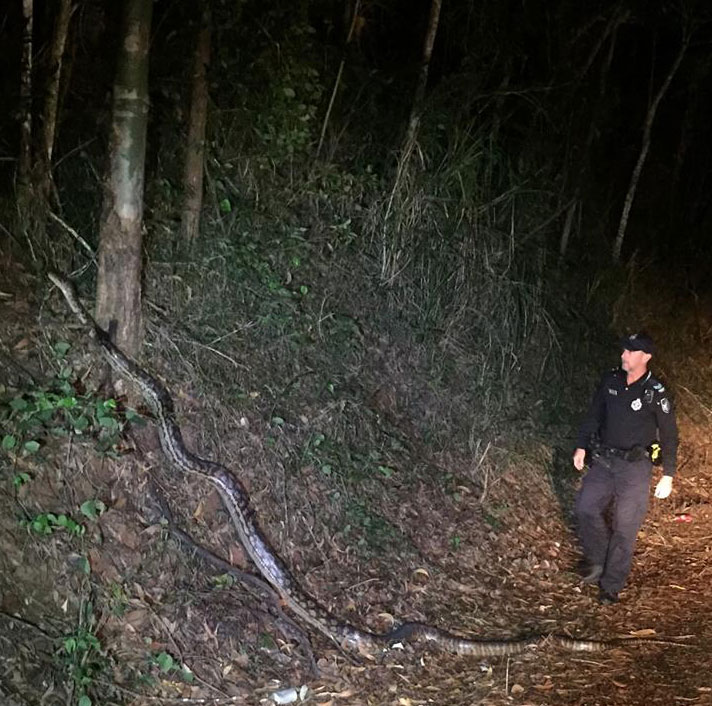 Queensland Police escorted the giant scrub python off the road.

Things do tend to be bigger in Australia. Big Banana, Big Prawn, Big Guitar. Heck even the beer cans are bigger. But snakes? Yes!

A massive scrub python (Morelia amethistina) was apparently taking its time crossing the road when Australian police on patrol stopped to investigate. The snake, estimated to be about 5 meters in length, was in no hurry until police officers Sergeant Ben Tome and Acting Senior Constable Chris Kenny stepped out of their vehicle. Tome had Kenny stand as safely close to the snake as he could and then snapped a photo, which was posted to the Queensland Police Service Facebook page.

Boss, we’re going to need a bigger ladder 🐍🐍🐍 During a night patrol near Wujul Wujul officers had to wait for this scrub python to cross the road https://goo.gl/kc9ZG3

The snake, not wanting to have anything to do with the police, slithered off.

"Boss, we’re going to need a bigger ladder 🐍🐍🐍,” they wrote on the page, as the picture shows the massive snake climbing up an embankment and back into the forest.

"Certainly if you were to attempt to pick it up or grab it or poke it with a stick they can swing around quite quickly and if he grabs hold of you, you're in all sorts of trouble," Dave Walton of Cairns Snake Removals told ABC News Australia. "These days we don't see them getting that big in more of the built-up areas, because it's pretty easy to get sprung when you're that big. For a snake to be lucky enough to live long enough to get to that size is reasonably rare, because they often get themselves run over or captured or killed."

Fans of the Queensland Police Service's Facebook page had a little fun with the find, and the QPS responded in kind.

The scrub python is also known as the amethystine python and is native to Indonesia, Papua New Guinea, and Australia.