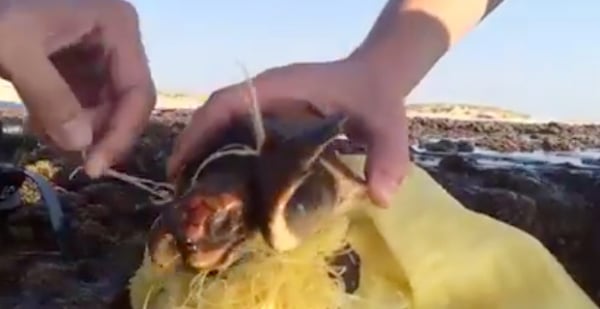 For The Sake Of Reptiles And All Living Things, Put Litter In Its Place

Ecosurfers untangle a juvenile sea turtle from some floating garbage.

This video is a simple reminder to always, always put your rubbish, garbage, litter, whatever you call it, where it belongs to ensure that it doesn’t end up in the environment. This clip, by Ecosurf was posted to Facebook last week showing the negative effects that trash has on the world’s oceans.

This is what happens when you dump trash in the ocean.Video via Facebook/Ecosurf

The juvenile sea turtle in the video was tangled in some trash and these two surfers worked to free the reptile from the trash that would have most likely contributed to its demise. Be warned that there is some cursing that goes on in this video, but only to emphasize  what trash does in the environment. 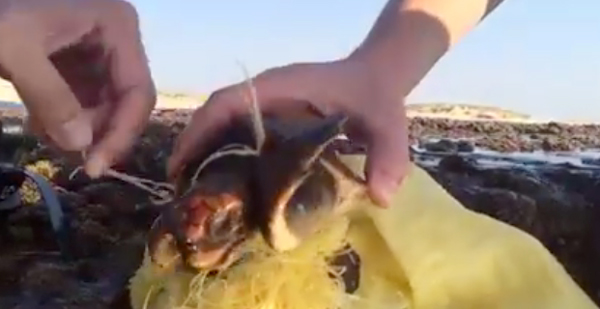 Ecosurfers untangle a juvenile sea turtle from some floating garbage.

Last week, 30 boats left Hawaii to record the size and location of the Great Pacific Garbage Patch, what some consider to be the largest pile of trash floating in the ocean. The three week expedition will involve boaters using GPS and a smartphone app to search out and record the plastic, wherever it may float. Samples of the trash will be shipped to the Netherlands, where it will be counted and recorded. According to a report in the Honolulu Star Advertiser, the majority of the trash is comprised of very small pieces of plastic that are suspended just below the surface of the ocean, though larger pieces of garbage, including garage doors and other junk have been discovered in the Garbage Patch.

The project, called the Mega Expedition is the first exercise in an effort to rise $60 million to build a device that will hopefully start cleaning up the Great Pacific Garbage Patch within five years.