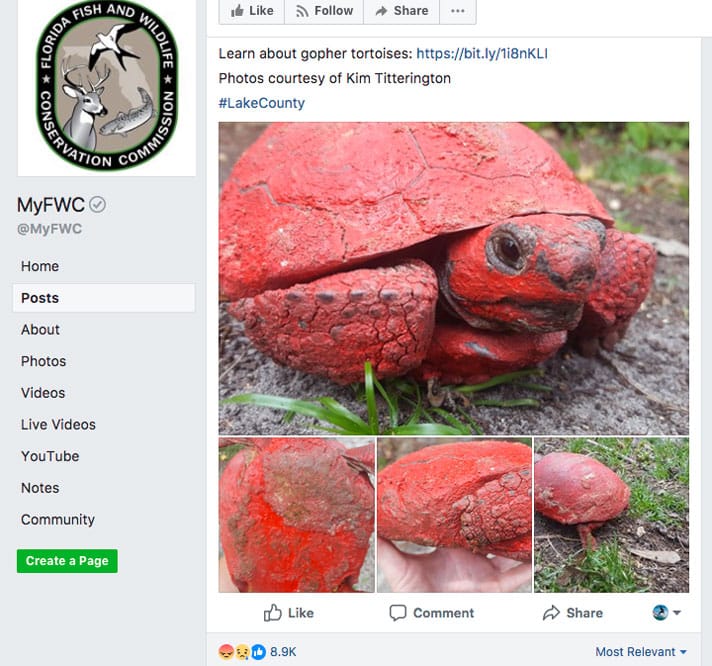 The Florida FWC is offering a reward for information on who may have painted the tortoise.

A gopher tortoise (Gopherus polyphemus) was found in Lake County, Fla completely covered in red spray paint and concrete, and the Florida Fish and Wildlife Conservation Commission is offering a reward that leads to the person(s) responsible. 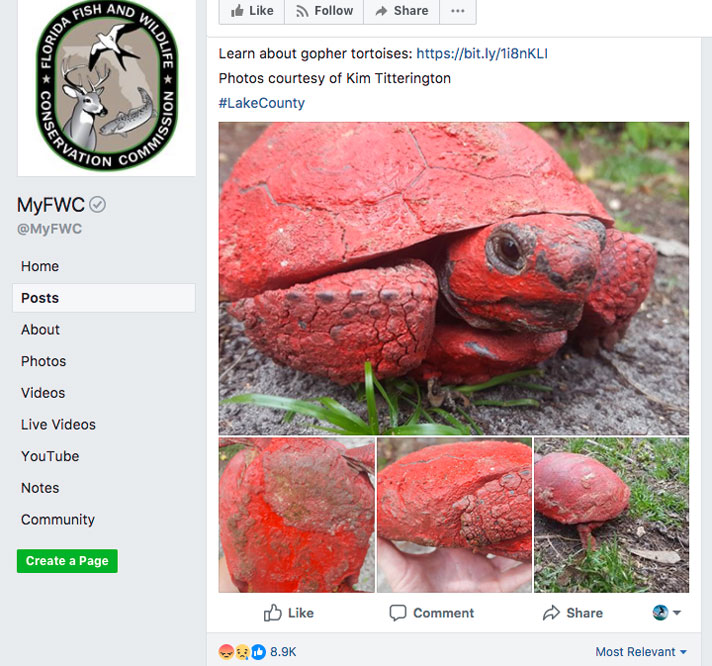 The Florida FWC is offering a reward for information on who may have painted the tortoise.

According to the FWC’s Facebook page, the tortoise was walking down the middle of County Road 455 south of the town of Montverde when it was picked up by two people who then brought the reptile to Swamp Girl Adventures, a non-profit that seeks to educate the public about Florida’s wildlife and responsible pet ownerrship.

If you have any information about who may have applied the paint and concrete on this tortoise, please call our Wildlife…

"Even if he was like ‘in the line of fire,’ if they were painting something or marking something there should just be like a strip or a splatter,” Titterington said. “The amount he had and the thickness of it was just incredible."

Titterington told FOX35 that about 70 percent of the paint and concrete has been removed from the tortoise, which she named Raphael. Titterington hopes to completely rehabilitate the chelonian and release him back into the wild.

"Applying substances like paint on tortoises can inhibit their ability to absorb vitamins from the sun’s UV rays through their shells, has the potential to cause respiratory problems and can lead to harmful chemicals being absorbed into their bloodstream," the FWC wrote on its Facebook page.

If you have any information, contact  the Florida Wildlife Alert Hotline at 888-404-FWCC (3922), #FWC or *FWC on a cellphone, or text/email Tip@MyFWC.com.

Gopher Tortoise Once Painted Red Released Back Into The Wild

Gopher tortoises (Gopherus polyphemus) are protected throughout their range either by state or federal law. Gopher tortoises are listed as threatened species in the state of Florida. Both the tortoise and their burrow are protected. They reach maturity at 10-15 years of age and are considered a long lived tortoise.