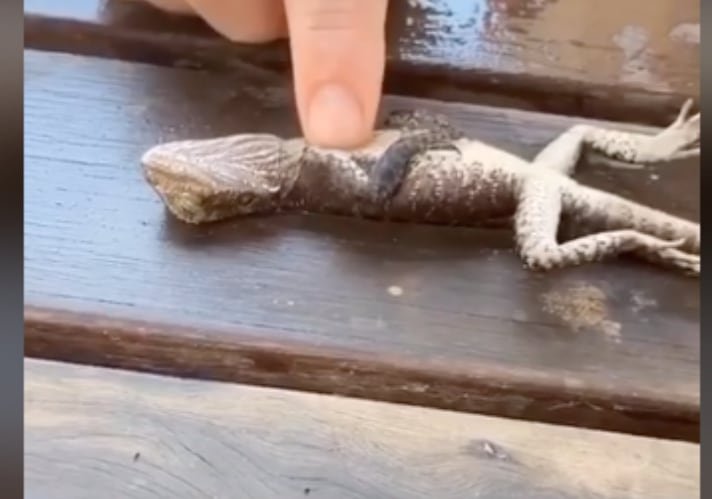 After 10 minutes of CPR, the lizard was able to breathe on its own.

Iguana Tries For Hole in One at PGA Puerto Rico Open
Snake Hunter Teams Up With VolAero Drone Start Up To Hunt Pythons In Everglades
More Than 10,000 Critically Endangered Radiated Tortoises Seized From Home In Madagascar

With all the negative news regarding animals suffering due to massive Australian wildfires, a bit of good news from Down Under is always a blessing.

*WARNING DISTRESSING CONTENT* with a very happy ending. On Saturday one our off duty firefighters was asked to attend a neighbourhood pool where a drowning had occurred. Upon arriving at the scene a youngster was laying unconscious and not breathing after being found un-responsive in a pool skimmer box by some children after failing to ‘scale’ from the pool. Immediately getting to work the 37 firefighter checked for a response by looking, listening and feeling for life the patient appeared cold blooded. After receiving no response the youngster was turned onto its back and Cardiopulmonary compressions started in an attempt to get a spring in his tail. After more than ten minutes things weren’t looking good for the little fella but soon after an occasional “gasping breath” was noticed. From previous experience our firefighters know this is not the time to stop so CPR was continued. Then miraculously “Lucky” the lizard started to breath on his own. He was quickly rolled back onto his stomach and within half an hour with a little sunshine was back to chasing insects. It also serves as a timely reminder to know your CPR action plan in and around the water as we head towards the end of summer.Another great save by the Gordon crew. Fire and Rescue NSW St John Ambulance Surf Life Saving NSW #preparedforanything Taroonga Zoo #beardeddragon #CPRsaveslives

A firefighter in New South Wales, Australia saved a lizard that fell into a pool skimmer and “drowned.” The first responder, with the Fire and Rescue NSW Station 037 Gordon, got to the little lizard just in time to perform a bit of CPR. With the lizard on its back, the firefighter began performing little cardiopulmonary compressions on the reptile, while children out of the picture looked on in apparent disbelief.

The firefighter worked on the reptile for more than 10 minutes in what was beginning to look like a futile attempt to save its life when one of the children noticed the lizard breathe, again and then again. The firefighter continued performing the compressions until the lizard was breathing on its own. The lizard, now named Lucky, was rolled onto his stomach and after about 30 minutes in the sun, the reptile took off running. Fire and Rescue NSW Station 037 turned the call into a teachable moment. "… serves as a timely reminder to know your CPR action plan in and around the water as we head towards the end of summer. Another great save by the Gordon crew."