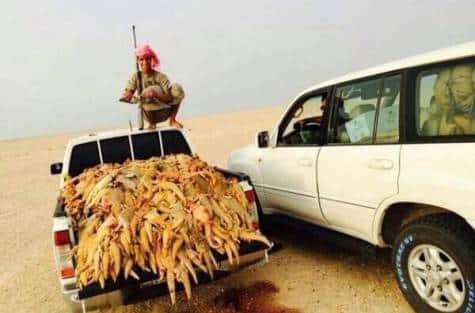 Families Of Saudi Uromastyx Hunters Appeal For Their Release

Men were arrested after a photo showing a truckload of lizards went viral on the Internet.

Posting a photo on social media sites can have wide ranging effects, both positive and negative. In the case of two Saudi lizard hunters with a truckload of Uromastyx lizards, the effects have been largely negative because after the image went viral on the Internet, they were arrested by Saudi authorities. Lawyers for the families of the two Saudi Uromastyx hunters are appealing to the Saudi interior minister and the Saudi Wildlife Commission to release the two men immediately because they claim the men did nothing wrong, and were only arrested after the image showing the truckload of dead lizards was posted on the Internet, lawyers for the two men told GulfNews.com.

The brother of one of the men who was detained said that they did nothing wrong and didn't break any laws.  “There is no law that bans hunting dhabi ( the local name for the Uromastyx lizard) and those who were detained were not hunting in reserves, but in open areas. There are so many people today who are hunting the lizard as a hobby,” Fayez Al Otaibi told local news site Sabq. He blamed the arrest of his brother and the other man on the outcry that followed after the photographs went viral on the Internet. 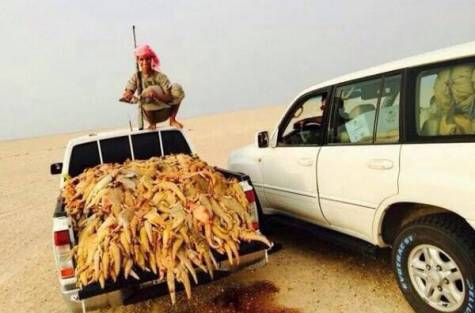 The two men were arrested for poaching dhabi, or Uromastyx lizards, in Saudi Arabia.

“The way they were arrested gives the impression they were implicated in a security plot. It is just hunting animals that were eventually given to relatives and friend,” he said. “I urge the interior minister and the chairman of the Saudi Wildlife Commission to give orders to release our sons and not to punish them for what they did as they broke no law or committed an offense. They are not criminals,” he said.

The chairman of the Saudi Wildlife Commission, Prince Bandar Bin Saud, confirmed that the two men shown in the photograph were arrested and said that the arrests were made “thanks to the positive response to the calls made two weeks ago to help identify and detain the poachers.” Last month, the prince appealed to the public for help in identifying the men when the photo went viral on the Internet. “This is a crime against the environment and an outrageous violation of our Islamic values that reject such attitudes,” Prince Bandar said at the time. “Poaching is also against all laws enacted by the kingdom to protect and preserve wildlife and natural assets. Attacking people is a form of terrorism and so is abusing animals,” the prince was quoted as saying in a story that appeared on the news site Sabq.

The prince is an advocate for herpetological studies in the kingdom.

REPTILESMagazine.com ran the image on April 28. The article and the image was posted on the magazine's Facebook page where there was quite the debate, mostly negative, about the hunting of these lizards in Saudi Arabia.