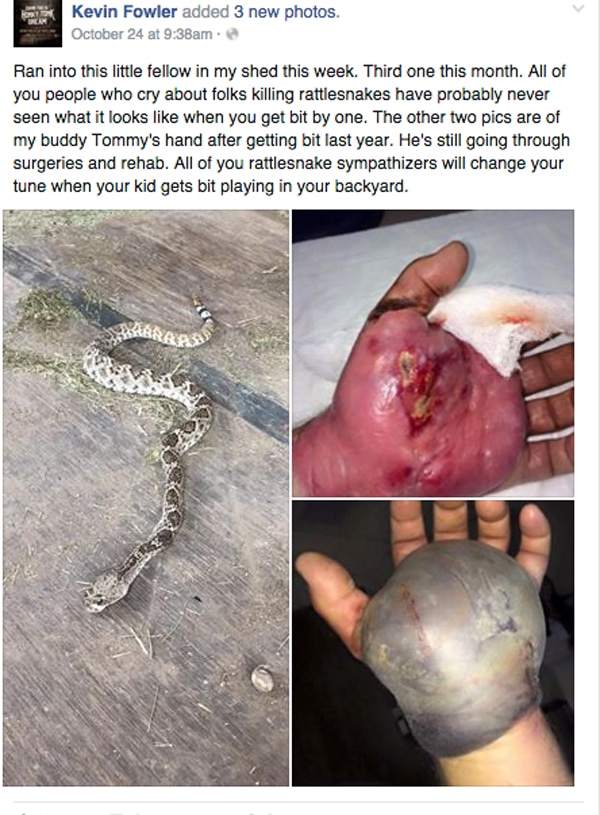 Singer Kevin Fowler killed a rattlesnake he found in his shed.

Steve Irwin’s Family To Return To Animal Planet
Scared Of A Snake, Man Tries To Shoot It But Hits Mother-In-Law Instead
Man Apprehended Trying To Sell Nile Monitor Via Facebook

Kevin Fowler, a country music singer encountered a rattlesnake in his shed and apparently killed it, which caused a heated discussion on social media after he posted the story to his Facebook page. Fowler also posted some photos of his friend’s hand, who got bit by a rattlesnake last year and said,

“All of you people who cry about folks killing rattlesnakes have probably never seen what it looks like when you get bit by one. All of you rattlesnake sympathizers will change your tune when your kid gets bit playing in your backyard.” 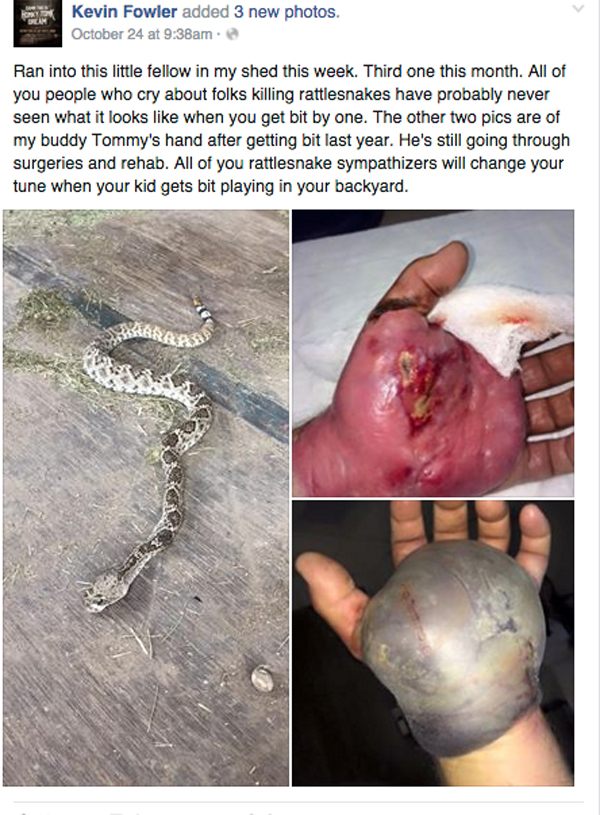 A country music singer posts a photo of a rattlesnake and a friend's hand after getting bit by a rattlesnake.

Some of the 36,000 comments on Facebook were for and against the killing of the snake. The arguments delve into everything from rattlesnakes, which it was supposed to be about, to religion, politics, and everything in between. Here are a few samples:

“Wonder if the snakes friend is posting pics of his dead buddy and convincing every one to kill humans? Kinda stupid to take over a creatures habitat and then complain about the consequences,”

“I’m sorry your friend got bit, but that's the risk you take when move into their territory which is getting smaller every day. Hope your friend recovers soon.”

“Learn to be a real country boy and coexist.”

And some were fully supportive of Fowler

"Sympathizers" are obviously not dealing with them on a daily basis as we do here in North Texas?! My brother got barely SLICED on his toe, and almost lost his whole leg. Going on 12 years ago and he STILL deals with muscular damage all the way up his thigh.” 'No, he wasn't trying to kick it, it struck with NO warning, because YES they are adapting and no longer give a "warning rattle."

"From a "sympathizer" – I really hate the whole 'only good snake is a dead snake' thing. Snakes are a natural and important part of our world. However, if there is a venomous snake – rattlesnake, copperhead, cottonmouth, etc – around your house, I have no problem killing it. If it's not venomous- bullsnake, rat snake, indigo, kingsnake – it can be really helpful by killing mice/rats/rattlesnakes, so leave it alone. Take the time to learn the difference. If you see it out in the country, away from houses, etc, let it go. A lot of people get bit trying to mess with them, so leave them alone. No reason to hate on folks who don't kill every snake we see!"

"Snakes are considered serpents in the Bible. The serpent tempted Adam and Eve. Gays do have rights too, just because God calls us to love everyone including the gays, trangenders etc he doesn't condone their actions. It is an abomination period. It's clear in black and white. Satanism isn't of God, it's idolatry….. that's a sin. How much clearer do I have to be. I love everyone and hate no one. That doesn't mean I agree with their lifestyle, or any other lifestyle that doesn't follow Gods commandments….and Gods word. I didn't author the Bible, I choose to follow it. If that makes me a Jesus freak, bigot, a religious advocate, then I will take my licks!! As far as Satanism, devil worship, and witchcraft…it's also expressed in the Bible that's it's a sin of idolatry. Which I don't practice these as well."

The inaccuracies [and politics] aside, what do you all think about rattlesnakes in your yard? Do you have them safely removed or kill them on the spot?