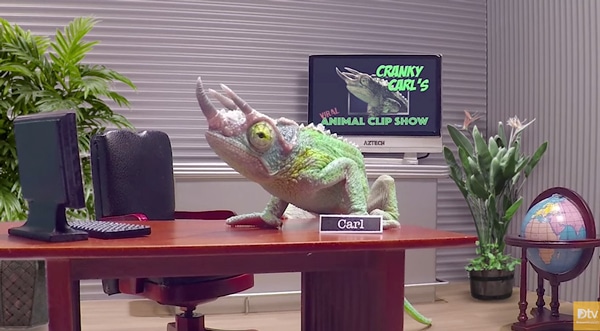 Have you seen Carl pick apart these videos?

DreamWorksTV, part of DreamWorks Pictures, the same 3D company that brought you Shrek, has introduced Carl the Animal Clip critic. Because animal videos are probably the most watched clips on the Internet, DreamWorksTV has launched a TV show (for the Internet of course) that highlights some of those clips starring Carl, a 3D Jackson’s chameleon, or is he 3D?

In Cranky Carl’s Viral Animal Clip Show, Carl showcases several video clips that are out in the video world and critiques them, wondering why anyone would spend two minutes of their life watching what he considers video clips not worthy of his viewing pleasure.

Carl looks very realistic and the clips makes me wonder if indeed the chameleon is 3D or not. LightWave 3D? Softimage? Or is it a real live chameleon that was given an animated mouth? Let us know in the comments.