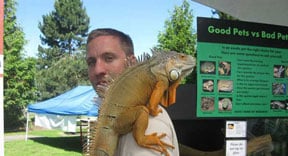 Mike the Reptile Guy in Abbotsford , B.C. is looking for a larger facility for his rescue

Canadian Mike Hopcraft, known as Mike the Reptile Guy in Abbotsford, B.C. is seeking donations so he can move his rescue into a bigger facility. Currently the facility is a little more than 1,300 square feet and is currently holding more than 200 reptiles. There are several animals that are also housed offsite due to the fact that they are too large for the current facility. Hopcraft posted a 12 minute Youtube video giving a tour of his rescue facility as well as asking for donations. Hopcraft, who has been rescuing reptiles in Canada for more than 10 years, hopes to raise $75,000 to help him move the rescue to a larger location.

"If we can get in to a larger facility, we will be able to display our larger animals," Hopcraft told ReptilesMagazine. "Getting a larger building and a zoo permit will not only allow us to display any reptile that we have, it also allows us to take in any rescues and surrenders that come up. Having a larger facility would basically mean that there are no more excuses for the ministry to euthanize any reptiles without giving them a chance to find a new home." 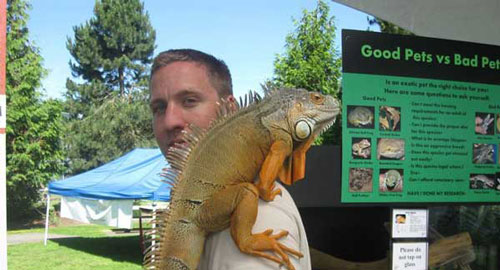 Mike the Reptile Guy in Abbotsford, B.C. is seeking donations so he can move his rescue into a bigger facility.

In addition to rescuing unwanted reptiles and amphibians, Hopcraft does educational presentations, public events, and birthday parties. He also adopts out rescued animals to those who have the capability to properly care for them. Hopcraft's previous facility was 2,000 square feet and housed more than 100 rescued animals, including a 200 pound python and a 7 1/2 foot American alligator. The facility was funded with money raised from private tours of the facility, but was forced to close it down in 2011 due to changes in display and ownership laws in British Columbia.