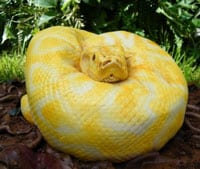 An amelanistic Burmese python cake (Python molurus bivittatus madagascan vanillan bean spongen) has caused quite a stir on Facebook for Francesca, a UK-based baker and owner of North Star Cakes who created a cake that resembles a Burmese python for her daughter's 6th birthday. As of August 17, 2012, the image of her snake cake creation on Facebook has garnered more than 4,002 shares and 2,493 likes. In addition, more than 23,000 Facebook users are talking about her Facebook page. And she says her orders have gone up quite a bit since a link to her creation was posted on Twitter. The image was picked up by a fellow cake baker, Duff Goldman of Ace of Cakes who tweeted about the cake, providing a link to Francesca's Facebook page to his 40,000 followers on Twitter.

The cake by the way was Madagascan vanilla bean sponge with jam and buttercream wrapped in white chocolate fondant. The baker, Francesca, said he was delicious, and she grew quite fond of "him" as he was making him. She also noted on her Facebook page that she is not sharing "quite just yet" how she made the Burmese python snake cake.