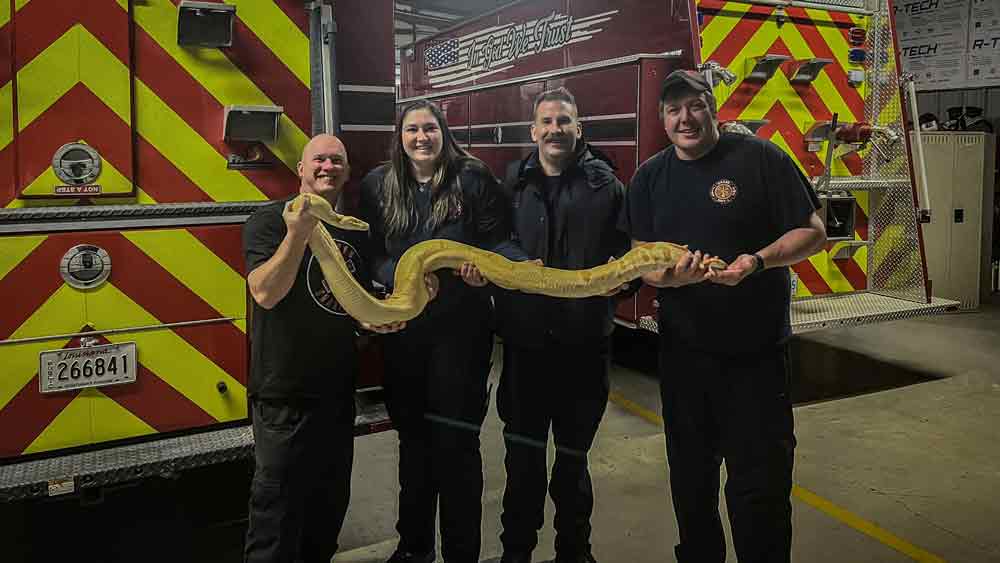 Firefighter John Phelan and Capt. Freddy Martin broke a window to get the snake out safely.

During a secondary search, the first responders found a 6 ft., 30 lb albino boa constrictor in an enclosure.

Firefighters with the Caddo Parish Fire District in Keithville, LA saved a 6 ft albino boa constrictor (Boa constrictor sp.) and two box turtles from house fire this week. The firefighters were called to the scene around 10:30 a.m December 16 and found the home on fire.

They worked to extinguish the fire and saved a variety of caged animals at the same time. During a secondary search, according to KTAL News 9, the first responders located a 6 ft., 30 lb albino boa constrictor in an enclosure. Firefighter John Phelan and Capt. Freddy Martin broke a window to get the snake out safely, according to reports.

The snake and the box turtles were taken to Steve’s Snaketuary for rehabilitation. The woman who was caring for the snake apparently didn’t possess permits to keep it, according to Steve Kennedy of Steve’s Snaketuary so the snaketuary will care for the animal until the owner can claim it.

The boa constrictor sustained minor surface burns and is apparently doing OK. According to the news report, a rabbit, seven dogs and five cats died in the fire. To the Caddo Parish Fire District Number Four, thank you for your service and Merry Christmas.

Boa constrictors are one of the most popular large constricting snakes among expert reptile keepers. They rarely exceed 10 feet in length and are still powerful snakes. These snakes are for expert keepers who can give them large enclosures. A variety of morphs are available in this species, including albinos.