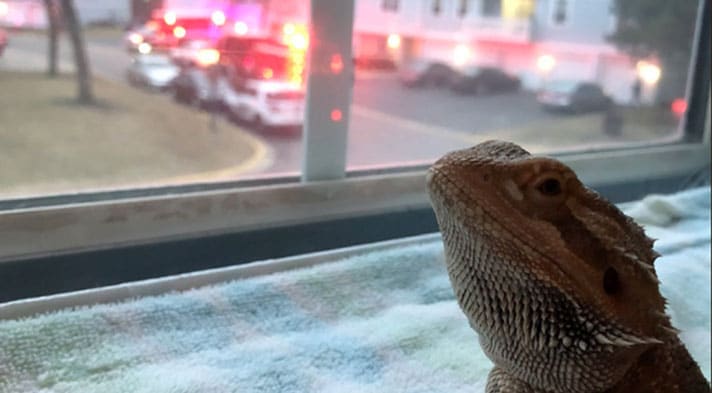 Bearded Dragon Is Internet Famous Thanks To Disaster Girl Meme

Petey is the reptile version of Disaster Girl.

Petey a bearded dragon (Pogona vitticeps) living the lizard life in Chicago, has become Internet famous thanks to her owner who snapped a photo of her near a windowsill along with a parking lot full of emergency vehicles outside their home. 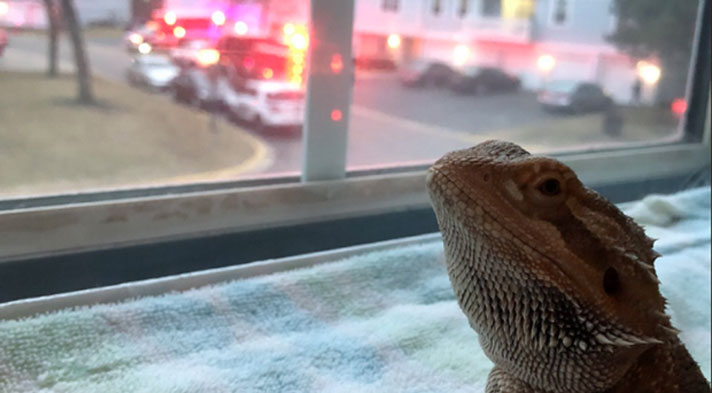 Petey is all chill in this photo as controlled chaos ensues outside.

Isabella Mione, 19, took the photo because Petey’s pose had an eerily similar look to that of Disaster Girl, a photo that has gone around the Internet since 2004.

I think my lizard may have murdered someone pic.twitter.com/p6V7O6Ay2Q

“I took (the photo) just because it looked exactly like the little girl in the meme and so I thought it would be hilarious to compare them,”Mione told the Press Association. And Twitter and the social media universe did the rest.

Mione and her boyfriend acquired Petey, who is actually a girl, in September 2017 and is the only reptile she keeps.

“I would love to get more in the future when I'd be able to support them all,” Mione told ReptilesMagazine.com.  "I joked with my boyfriend I want to have a reptile rescue but I would never be able to give them up and we'd end up with hundreds of them running around!"

Although Petey is Mione’s first pet lizard, she has had an interest in reptiles since she was a kid.

“My neighbor used to let me watch his gecko as a kid and that has to be the youngest I remember having an interest in reptiles,” Mione said.  “Besides that, I used to try and catch the wild lizards around my grandma's house in Florida and the snakes in the woods in Illinois.

There is just something though about Mione’s bearded dragon, whose image has garnered more than 259,000 likes on Twitter.

“Having Petey taught me that lizards are so interesting and have such a personality that you wouldn't expect.”