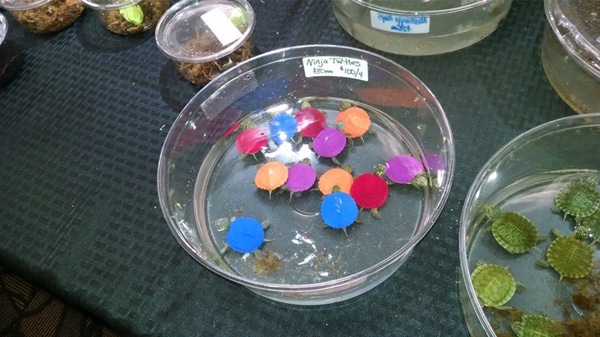 The vendor claimed that they were modified like GloFish when it is obvious they were painted.

In my work as the editor of ReptilesMagazine.com, I have come across a lot of questionable things and images. This one has got to be by far the worse I’ve seen in a long time. Joshua Wiegert, an occasional writer for FishChannel.com posted this image up on his Facebook page that got my blood boiling when I found out that it was not a Photoshop image, but an actual image of hatchling red-eared sliders painted an array of colors. The photograph was taken at the Oklahoma Reptile Expo, and the photographer, Gerald Griffin, says that the vendor claimed that they were genetically modified like GloFish. But it is apparent that the shells of these poor turtles were painted with acrylic paint. Griffin apparently left the vendor’s booth in absolute disgust.

“On Sunday January 31st 2016 my wife and I went to the Oklahoma Reptile Expo as we had many times before. I was there looking for a kingsnake and did not find what I was looking for," Griffin told ReptilesMagazine.com. "My wife Kayla and I looked around for a while and she was looking for a pet. We talked to a number of vendors and ended up buying three leopard geckos from three different vendors. All in all it was a good event until we walked by a vendor that had fluorescent colored red-eared slider babies labeled "Ninja Turtles." I looked as well as my wife and was like no way. Why would someone paint those turtles. As we were walking away I heard the guy talking about them saying that they had the gene that Glofish had and he went on talking about the Glofish. I had honestly thought I had misheard him but then my wife commented “GloFish gene in those painted turtles?” So I did not overhear that wrong. I went back and got a picture of them because I was honestly outraged that they would be allowed to sell something like that at a reptile expo. I then went on and posted that pic on the Reptile Expo Page to see what their response was to the turtles. I did not get the vendor's name or card. In retrospect we should have but I was literally so disgusted all we could do was leave.” 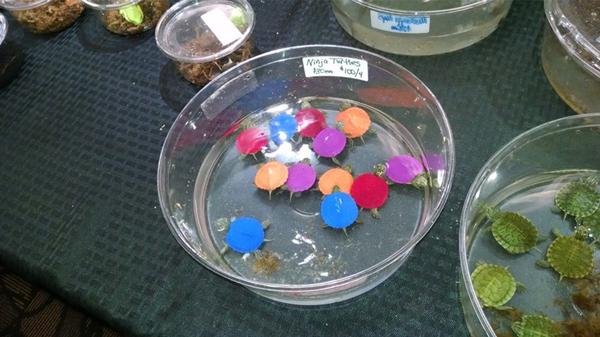 If you come across turtles painted like these, report the vendor to the proper authorities.

Has anyone attending reptile expos around the country seen such disregard for the well-being of baby sliders? How will these turtles absorb UVB light through their shells? Judging by the disregard of these baby sliders, it is obvious that the vendor of these painted turtles also disregarded the law regarding the sale of red-eared sliders that are less than 4 inches in carapace length.

If you are at a reptile expo and you see someone selling baby sliders that are painted, report them to the folks in charge of the expo, as these sliders are not only illegal to sell, they have been harmed in a cruel way.